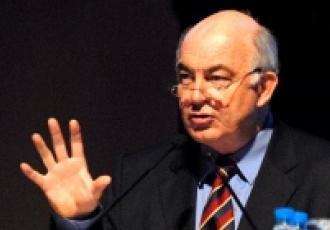 Until February 2009, Kemal Dervis was the Executive Head of the United Nations Development Programme and Chair of the United Nations Development Group, a committee consisting of the heads of all UN funds, programs and departments working on development issues at the country level. In 2001-2002, as Minister of Economic Affairs and the Treasury of Turkey, DerviÅŸ was responsible for launching Turkey’s successful recovery from a devastating financial crisis. DerviÅŸ is also a Member of the Board of Overseers of Sabanci University in Istanbul and will contribute to the work of that university, particularly on European enlargement issues. Prior to his tenure as Minister of Economic Affairs, DerviÅŸ had a 22-year career at the World Bank, where he became Vice President for the Middle East and North Africa in 1996 and Vice President for Poverty Reduction and Economic Management in 2000. At the World Bank he also managed work on the transition of Eastern Europe after the fall of the Berlin wall, trade and financial sector policies in emerging markets and the reconstruction of Bosnia. From the end of 2002 to the summer of 2005, DerviÅŸ was a member of the Turkish Parliament representing his native city of Istanbul. During that period DerviÅŸ was one of the two Turkish representatives to the Convention of the Future of Europe. Since then he has participated in various international and European task forces and networks such as the Global Progressive Forum, the Progressive Governance Network, and the Commission on Growth and Development, sponsored by the World Bank. During the same period he was also active in EDAM, a Turkish think tank working on economic and foreign policy issues. DerviÅŸ earned his Bachelor and Master’s degrees in economics from the London School of Economics, and his Ph.D. from Princeton University. He also taught economics at Princeton and the Middle East Technical Universities before joining the World Bank. He has published many articles in academic journals as well as current affairs publications. His most recent book, A Better Globalization, was published by Brookings Press for the Center for Global Development in 2005. DerviÅŸ is fluent in English, Turkish, French and German.