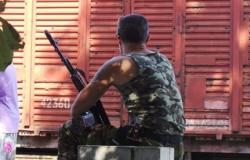 The relationship between major powers in the world determines the level of global stability. Two constellations are imaginable: balance of power and collective security. The end of major (world or cold) wars offers possibilities for change from one constellation to another. This article tries to explain the origins of the Ukraine crisis. It posits that the crisis in Ukraine is only a symptom of a wider conflict between two major powers (or power blocs), whose origins can only be understood by assessing the post-Cold War security architecture in Europe. Instead of having integrated Russia in a collective security organization on an equal level, the West kept NATO alive and by doing so deteriorated the relationship with Russia. Despite different warnings from Moscow, NATO invited Ukraine to become member, and the EU offered Trade and Association Agreement talks to Ukraine. As a result, the relationship glided back towards a classic balance of power relation with spheres of influences. To prevent similar conflicts in the future, Russia should be integrated into the Euro-Atlantic security architecture. Ideally, the existing collective defence organization (NATO) should be transformed into a collective security organization with the inclusion of both Russia and Ukraine.

Politics and policies are sometimes fraught with misperceptions, miscommunication, and miscalculations. That also applies to the global level. Some power constellations are more prone to these deficiencies than others. There is less chance for misperceptions, etc., in a security community than in a pure balance of power system. Applied to the Russian-West relationship, the existing balance of power system is prone to misperceptions, miscommunication, and miscalculations.
Of the three main great power constellations, classic balance of power is the least stable (as in our case). Collective security is more stable, and should have been the objective after the end of the Cold War. After the Ukraine crisis, the goal to create a collective security organization in the wider Europe is even more urgent. (The most stable constellation is a security community).
EU's Neighbourhood Policy is failing, not only vis-à-vis Ukraine and Russia, but also in Northern Africa and the Middle East. There is a fundamental need to rethink EU's Neighbourhood Policy.
American and European interests sometimes overlap, but not always, also within NATO. One can observe a pattern whereby the US pushes the Europeans to accept the American view. For instance on NATO extension (certainly in 2008), as well as on missile defence. This article implicitly argues that the European member states within NATO should be more careful to agree with the US view if it does not fit their own interests.
Collective defence organizations (= alliances) are inherently unstable as they are constantly looking for an external enemy. This article argues that NATO's prolonged life after the Cold War is not normal, and contributed to the crisis with Russia (by extending NATO to the East, incl. plans to include Georgia and Ukraine). Collective security organizations (like the UN) are more stable.
The way how the ‘losers’ of a (cold) war are treated determines the stability in the aftermath. The international community did well after 1815 and 1945, but failed miserably after 1918. The argument of this article is that also after 1989 the West missed an opportunity to integrate Russia into the Euro-Atlantic security architecture (on an equal basis). The end of (cold) wars are perfect times for trying to move from one great power constellation to another (e.g. from pure balance of power to collective security).
Access Article

The Commitment to Disaster Risk Reduction as a Bridge between Humanitarian Aid and Sustainable Development
Francesca Pusterla
Vol 8, Issue 4, November 2017