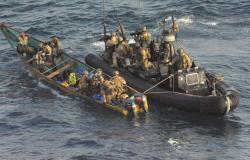 In view of continued international counter‐piracy efforts and these recent incidents, this article takes the five obstacles presented by Percy and Shortland (2013), as its point of departure for an analysis of key developments of importance for Somali piracy since 2013. Specifically, the article firsts offer an analysis and updated version of Percy and Shortland's five obstacles. Second, I argue, that a sixth obstacle should be added. This obstacle is the phenomenon that practitioners as well as academics working with organised crime refer to as ‘poly‐criminals’. Having elaborated on this additional obstacle – with reference to interviews conducted with key actors in Somalia – the third section explicates the policy impact of poly‐criminal pirates; it offers a discussion of what this alternative conception means for external actors’ counter‐piracy engagements, with particular attention to the risk of creating ‘balloon effects’ when addressing a challenge of this kind (poly‐criminals) through too narrowly defined counter‐piracy lenses, mandates and programmes.

The EU as a New Form of Political Authority: The Example of the Common Security and Defence Policy
Mary Kaldor
Special Issue: Changing the Debate on Europe – The Inaugural Dahrendorf Symposium

Killer Robots: Why the US should Lead the Ban
Denise Garcia
Vol 6, Issue 1, February 2015