The World Bank is Getting ‘Shared Prosperity’ Wrong: The Bank Should Measure the Tails, Not the Average 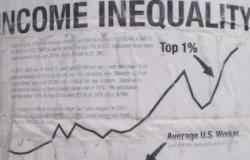