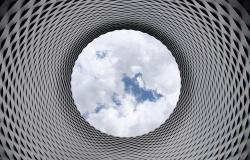 The question of whether global capitalism can resolve the earth system crisis rests on the (im)possibility of ‘absolute decoupling’: whether or not economic growth can continue indefinitely as total environmental impacts shrink. Ecomodernists and other techno‐optimists argue for the feasibility of absolute decoupling, whereas degrowth advocates show that it is likely to be neither feasible in principle nor in the timeframe needed to ward off ecological tipping points. While primarily supporting the degrowth perspective, I will suggest that the ecomodernists have a wildcard in their pocket that hasn’t been systematically addressed by degrowth advocates. This is the ‘Fourth Industrial Revolution’, which refers to convergent innovations in biotechnology, nanotechnology, artificial intelligence, 3D printing, and other developments. However, I will argue that while these innovations may enable some degree of absolute decoupling, they will also intensify emerging risks in the domains of biosecurity, cybersecurity, and state securitization. Overall, these technologies will not only place unprecedented destructive power in the hands of non‐state actors but will also empower and incentivize states to create a global security regime with unprecedented surveillance and force mobilization capacities. This reinforces the conclusion that mainstream environmental policies based on decoupling should be reconsidered and supplanted by alternative policy trajectories based on material‐energetic degrowth, redistribution, and technological deceleration.