Revolution from the Inside: Institutions, Legitimation Strategies, and Rhetorical Pathways of Institutional Change 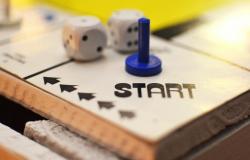 Photo by Breakingpic from Pexels