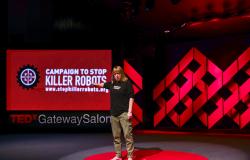 This article tracks the emergence and growth of advocacy around autonomous weapon systems (AWS). By looking at the ways in which activists problematize autonomous weapons and at the growing members of the alliance to ban killer robots, the subtle shifts in issue framing and configuration of the network are outlined. It is argued that the advocacy against AWS emerged from an epistemic community and grew to include significant non‐governmental organizations such as Human Rights Watch. It is further argued that autonomous weapons were initially conceptualized as ‘killer robots’ that threaten international security and the security of civilians during armed conflict. This framing later came to be supplemented by ideas that AWS may emerge as a new form of weapon of mass destruction that could be used to threaten citizens living in Western countries. The changes in the network that seeks to ban AWS and the shifting ways of problematizing them indicates that transnational activism is in flux. Discordant ways of approaching AWS may risk the formation of a broad‐based coalition to ban AWS. This study complements studies that focus on norms of and government policies towards future warfare.

I am grateful for the constructive feedback I received from the conveners (Ingvild Bode and Hendrik Huelss) and the participants of the EWIS workshop on ‘New Technologies of Warfare’ in June 2018 as well as from the anonymous reviewers of the Global Policy. The usual caveat applies.