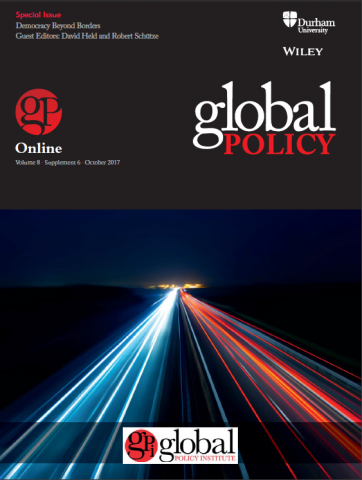 Edited by David Held and Robert Schütze, this special issue of Global Policy brings together a group of scholars from law, political science, philosophy, sociology, and history to discuss and assess the extent to which democracy can crystallise beyond the nation state, and whether such developments are, in principle, desirable. Of course, the debate about democracy beyond borders is not new; there have been extensive philosophical and political reflections stretching back through the ages. The purpose of the special issue is to reconsider these debates particularly in the light of the attempts at supranational institution building that have been made in the 20th century. This reconsideration is prompted by a striking paradox: while the forces of globalisation create an ever-greater demand for global cooperation, the belief in the legitimacy of international institutions is gradually declining.

David Held and Robert Schütze - Democracy Beyond Political Borders: An Introduction to the Special Issue

Sergio Fabbrini - Which Democracy for a Union of States? A Comparative Perspective of the European Union

Hauke Brunkhorst - Democracy under Siege of Authoritarian Liberalism: Remarks on the Crisis of National and Transnational Republicanism in Europe