Report of the Commission on Global Security, Justice & Governance: Confronting the Crisis of Global Governance 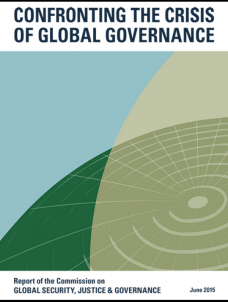 by the Commission on Global Security, Justice & Governance, with support from The Hague Institute for Global Justice and the Stimson Center.

On June 16, 2015, the Report of the Commission on Global Security, Justice & Governance was launched at the Peace Palace in The Hague. Its Co-Chairs, former U.S. Secretary of State Madeleine Albright and former Nigerian Foreign Minister and UN Under-Secretary-General for Political Affairs Ibrahim Gambari, presented the document and its key findings and recommendations.

“Much more is needed from the United Nations and, indeed, other global institutions dealing with, for example, security sector reform and the rule of law to economic and social recovery and the promotion of human rights,” noted Professor Gambari in his remarks. The UN and global governance institutions are ill-suited to address many modern, evolving threats and must reform or risk prolonging and deepening global crises.

According to Secretary Albright, the world requires “more capable tools of global governance, with different kinds of public, private, and mixed institutions designed for twenty-first-century challenges.”

To address these challenges, the report provides targeted reforms that transcend national borders, and reach out to diverse stakeholders, including business groups, mayors, civil society, and local communities and cities, a point which was emphasized at the launch by Mayor of The Hague Jozias van Aartsen, former Dutch Foreign Minister and member of the Commission.

Following over a year of preparations and more than twenty international consultations, the high-level, nonpartisan, and geographically and professionally diverse 14-member Commission offers far-reaching recommendations to reform the UN and other global governance institutions to better address new global challenges posed by conflict affected states, climate change, and the hyperconnected global economy. The report, entitled Confronting the Crisis of Global Governance, reflects the global perspective of commission members that have served in leading government and non-governmental positions in Brazil, Canada, China, Colombia, Germany, India, Indonesia, Japan, Lebanon, Netherlands, Nigeria, Tanzania, the United States and at the United Nations. The report and recommendations come in advance of the United Nations’ 70th Anniversary Summit in September.

If you are interested in writing a GP Response to the report please contact our Review’s Editor at: richard.murphy [@] durham.ac.uk.

GP Responses are short (up to 1500 words) opinion pieces that address entire, or parts of, recent publications and reports. They are published on the Global Policy website to add to ongoing debates.