Global Politics After 9/11: Failed Wars, Political Fragmentation and the Rise of Authoritarianism 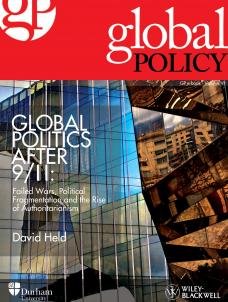 'The world of liberal internationalism appears to be on its death bed – but what will take its place? There are few better guides to what may lie in store for us than David Held, whose essays here display great erudition, institutional imagination and historical perspective.'

The essays in this book were all written under the shadow of 9/11 and the calamitous wars fought afterwards. They explore the impact of this event on global politics and the many ramifications it has had over time. They try to understand how these developments intersect, and sometime collide, with other events and trends, such as the global financial crisis, the Arab Spring and the rise of authoritarian politics, and they ask what sense we can and should make of them.

The volume charts a world in which globalization creates remarkable opportunities and significant risks. Opportunities because a global division of labour, world trade patterns, global communication infrastructures, a rule based institutional order and a growing sense that action is needed now on global challenges creates unparalleled prospects for prosperity, development and peaceful coexistence. Risks because never before have human communities been so densely connected allowing a crisis in one place, whether economic or security driven, to ricochet across the world in seconds. At the same time, the knowledge humankind has developed is no longer just an elite privilege; diffused and available on the internet (accessible to over a third of the world’s population), the cognitive resources of science and culture can be explored and exploited by a diversity of actors, with benign or regressive intent.

The e-book describes a crossroads. One road points to authoritarianism, while another opens up a more hopeful cosmopolitan future. The path to authoritarianism could be created by the dangerous drift in the world order, and a search for decisive solutions from ‘strong man’ leaders faced with a world that is seemingly out of control and where a retreat to the familiar (and away from the Other) offers a tempting way forward. But, it argues there are alternative routes. Indeed, the architects of the post-war era, who put in place a re-invigorated law of war and the human rights regime, set down elements of a universal constitutional order in which the principles of the equal moral standing of each and every person, and the equal rights and duties of each and all, became the bedrock of peace and stability.

Ultimately, David Held concludes that the future is still in our hands. Our forebears created stepping stones to a universal constitutional order, and we can still walk across them and build on them further. This remains a future worth struggling for.

1. Violence and Justice in a Global Age
2. Return to the state of nature
3. The End of the American Century: 9/11 Ten Years On
4. The Arab 1989?
5. The Arab 1989 Revisited
6. Wars of Decline: Afghanistan, Iraq and Libya
7. The Arab Spring and the Changing Balance of Global Power
8. Democracy, Syria and the western way of war
9. Red lines and dangerous incoherence: Syria and the international community
10. 9/11 Wars: A Reckoning
11. The Vicious Cycle of Pitiless Violence
12. Reflections on Intervention in the 21st Century

13. Global Challenges: Accountability and Effectiveness
14. The Decline of the West? The Future of Global Governance in the Face of the Rise of Asia
15. Gridlock: The Growing Breakdown of Global Cooperation
16. Global Financial Cooperation Buckling under the Weight of Previous Success
17. Global Financial Governance: Principles of Reform
18. Is the WTO deal good news for multilateralism?
19. The Syrian Crisis and Gridlock of Global Security Governance
20. European and Global Gridlock: Parallel Barriers to Effective Governance
21. Climate Change, Migration and the Cosmopolitan Dilemma
22. Climate Leadership in the Developing World
23. Europe, the European Union and European Identity
24. To be, or not to be: Europe Under Siege
25. The Brexit Dead End
26. Britain, Riding the Tectonic Plates

Afterword: Can Western Politics be Revitalised?

27. Path to Authoritarianism: The Collapse of the Politics of Accommodation
28. Gold Plated Populism: Trump and the End of the Liberal Order
29. The Changing Face of Global Governance
30. Stepping Stones to a Cosmopolitan Order 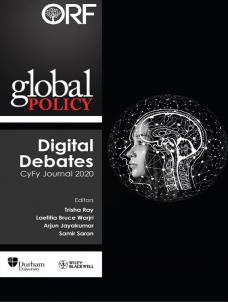 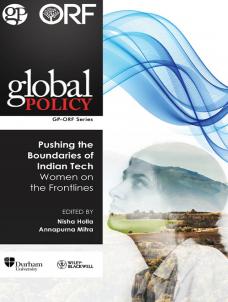 Pushing the Boundaries of Indian Tech: Women on the Frontlines