After the Paris Agreement: What Role for the BRICS in Global Climate Governance? 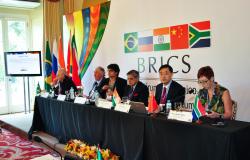 The rising power of the BRICS is now at the centre of debates about the future of global governance. Despite the consensus that the political, economic and strategic differences between the BRICS trump the commonalities, the BRICS have managed a level of cooperation that has exceeded expectations. This has led to inquiries about their influence on several policy domains, especially global finance. However, less attention has been given to the role of the BRICS in global climate governance, especially in the aftermath of the Paris climate agreement in 2015. Following the Paris Agreement, and the US' withdrawal, this paper examines the capacity of the BRICS to re‐shape global climate governance. Based on an analysis of the emissions profile of the BRICS, and multilateral and bilateral meetings between BRICS countries since 2015, it argues that while significant obstacles to the BRICS acting as a coalition remain, there are areas that can be identified where cooperation could be scaled up in coming years.

Embracing Evolution Post-Iraq : A response to 'Counterinsurgency Concepts: What we learned in Iraq' by General David Petraeus
Andy Salmon
Vol. 1, Issue 2, May 2010