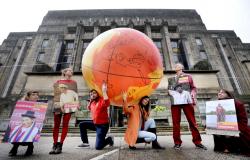 Today's global climate movement is substantial and diverse. In the mid‐2000s, an influx of activists and organizations advancing social issues, such as gender, labor, justice, development and indigenous rights (to name a few) arrived at the UN climate negotiations, fragmenting civil society. I argue that, in part, the rise of these ‘new’ climate activists can be explained by the ongoing negotiations for a legally binding treaty to replace the Kyoto Protocol, which added new issues that became ‘discursive hooks’ for NGOs’ claims to belonging in the climate regime. Linking to a specific institution had two effects: it served as an entry point to frame climate issues as social issues; and it helped NGOs carve a niche in climate policy in which they were authorities. In the Paris regime, this history matters, as some NGOs will fare better under the new rules than others. First, those established in institutions enshrined in the Paris Agreement will continue to have a foothold in the regime. Second, those that built their authority on their expertise or their capacity to deliver mitigation results may find more opportunities than those making moral claims.