Absent or Invisible? Women Mediators and the United Nations 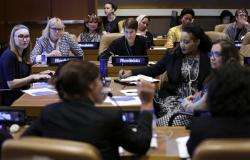 Since the adoption in 2000 of the landmark Security Council Resolution 1325 a significant body of research has emerged analysing the importance of women's participation in peace negotiations. ‘Participation’ represents one of the core pillars of the Women Peace and Security Agenda (WPS) adopted by the Security Council to redress the exclusion of women from the realm of peace and security. This work has highlighted the benefits of including women and has highlighted the different roles that women play within peacebuilding. However it has largely overlooked the specific category of women in the role of mediator. This is despite clear policy commitments throughout WPS resolutions adopted by the Security Council that call for greater representation of women within high-level UN mediation teams. This article seeks to address this gap by focusing specifically on the role of mediator, and the relative invisibility of women in that particular role within UN mediation efforts. The article takes as its starting point existing legal and policy frameworks that call for the inclusion of greater number of women in mediation roles, and seeks to understand why these goals are not being achieved.

Administering and Governing with Technology: The Question of Information Communication Technology and E-Governance
Jean-Marc Coicaud
Vol 7, Issue 2, May 2016