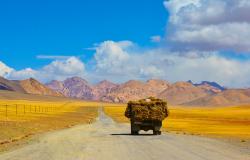 The Asian Infrastructure Investment Bank (AIIB) is mainly considered as a commercial connectivity and sustainability‐oriented infrastructure development bank, but there are also international security dimensions to the Bank. China's geostrategic and security motivations are said to be behind its spearheading of the AIIB. This essay highlights that China's national and international security calculations have evolved in the period after the Bank's opening. In the initial phase of the AIIB's formation, 2013–2017, the Bank's creation was part of Beijing's pursuit of a more outwardly ambitious and bold national/international security agenda of new institution‐building, looking to reshape the system of global governance. But since 2017, China's leadership has responded to sustained international pushback against its ambitious agenda, especially but not exclusively from the United States, and it has refocused its national security priorities onto protecting national economic growth, national sovereignty and regime preservation. Beijing has supported moves to put some distance between the AIIB and the Belt and Road Initiative (BRI), and Chinese strategists have shifted to seeing the AIIB as helpful for mitigating an economic downturn across Eurasia, and preserving China's continuing growth and regime survival in what they perceive as a period of external threat.

The Role of AIIB in the ‘New Normal’ Era for Indonesia and ASEAN
M. Chatib Basri
Vol 10, Issue 4, December 2019