Military Expenditure Trends for 1960–2014 and What They Reveal 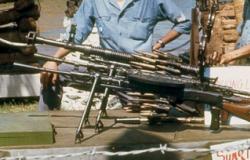 The article uses newly available consistent military expenditure data for 1960–2014 to examine past and current global spending trends during and after the Cold War. We are particularly interested in the impact of the end of the Cold War, 9/11 and the 2008 recession on military spending worldwide. The global share of military spending of East Asia & Pacific and the Middle East & North Africa increased relative to other regions since 1985. This increase underscores the need for western allies to bolster their power projection capacities. After 1999, both China and Russia raised their real defense spending, with China's increases far exceeding that of Russia. Both countries have a long ways to go to rival US capabilities. The North Atlantic Treaty Organization (NATO) continues to be heavily dependent on US defense spending. The post-1998 expansion allies assume about 2.4 per cent of the alliance's defense burden, while representing significant risks to NATO, given recent Russian actions in the Ukraine.

NATO must foster greater links with East Asia & Pacific countries, given altering defense and economic activities in the region.
Despite US Secretary of Defense Robert Gates’ call on NATO to redress its increasing reliance on the US, his concerns are even truer today than when delivered in 2011. Recent recovery in Europe from the 2008 recession provides an opportunity to address this imbalance.
NATO's post-1998 expansion presents many risks to the alliance, especially because the expansion allies only account for 2.4 per cent of NATO's aggregate military expenditure in 2014. Russian aggression in Ukraine and elsewhere underscores these risks.
Given recent defense buildups in China and Russia, the US and its NATO partners must consider reversing their recent military expenditure cutbacks. Fortunately, China and Russia have a long ways to go to challenge US military might.
The recent relative growth of military expenditure in the Middle East & North Africa and East Asia & Pacific underscores the need for western allies to bolster their air and sea-based power projection. These regional changes also augment the required size of rapid deployment forces. Except for the US, France and the UK, western allies have not responded to these needs.
Access Article