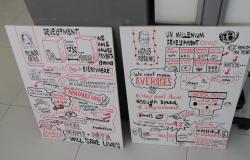 To what extent did the Millennium Development Goals (MDGs) succeed in becoming a reference point for public debates, academic inquiry, and policy‐focused research? We explore this by considering three empirical questions. First, were there discernible trends in the extent of media references to the MDGs – by year, publication, and geography over the relevant period? Second, were there discernible trends in MDG references across a sample of relevant academic journals and disciplines? Third, how does the pattern of MDG media references compare to the emerging early pattern of Sustainable Development Goal (SDG) media references? In our sample, we find that newspapers in the UK, India and Nigeria had much more frequent MDG references than those published in Australia, Canada or the United States. We also find that The Lancet had a notably high frequency of MDG‐referencing articles, potentially helping to explain the distinctive patterns of acceleration on health MDGs. We further find that UN summits were a key driver of MDG coverage, with 2005 as the year of peak MDG attention. News coverage for the SDGs in 2016 was similar to latter year coverage of the MDGs, although considerably higher than related coverage in 2001 and 2002.

The Tragedy of the Uncommons: On the Politics of Apocalypse
Jonathan B. Wiener
Special Issue: Looming Disasters