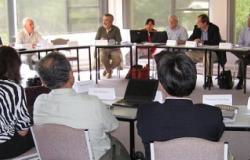 As a close observer to the rise and fall of Asian financial cooperation, in this paper, I will propose a logic that sheds light on the great powers' desire to establish institutions. I will analyze Asian financial institutions from two angles. The first angle is the establishment phase or negotiation process. In the economic field, politics relating to institution building is subtle and cunning. How to exclude parties unfavorable to the proposed institution is the fundamental politics of institution building. For parties excluded from the establishment process, blocking the unfavorable institution is a major concern. Again, tactics are subtle. Excluded parties try to get ‘involved' to influence institutional configurations or even to ‘kill' the original proposal from inside.

The second angle is the institutional configuration. Apart from decision-making procedures that have attracted much attention from scholars, several institutional features that relate to ‘prestige' are critical. The location of the organization and the position of the organizational head are of particular importance. In addition, in the case of regional organization, nuanced differentiation of membership (such as regional or nonregional) is also important because a member country's influence within the organization is reduced just because it is labeled as nonregional. While some may think that the location and membership label have nothing to do with the substance of the organization, in reality, they are primary concerns that negotiators look into.