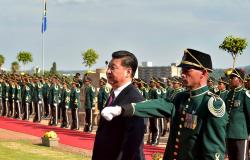 China has been committed to creating an ‘all weather’ relationship with Africa particularly since the new century by persistently expanding its economic, political and, more recently, security involvement in Africa. China's intensified peacekeeping efforts in Africa reveals not only China's desire for maintaining the regional peace and stability for its economic cooperation and trade with Africa, but also China's strategic intention of creating its own sphere of influence in the forms of Sino‐African ‘Community of Common Destiny’. In so doing, China wishes to cement its relations with Africa that it identifies, together with those with other developing nations, as the ‘basis of China's international relations’ and provide itself with a safe access to African markets, resources and investment destinations in order to sustain its economic growth that bases its long cherished dream of restoring its past glory of ‘Fuqiang’ (wealth and power) and rise in the global power hierarchy.

Conflicted Principals, Uncertain Agency: The International Monetary Fund and the Great Recession
Ayse Kaya
Vol 3, Issue 1, February 2012
The Haves and the Have-Nots: A brief and idiosyncratic history of inequality around the globe
Jo Thori Lind
Vol 3, Issue 2, May 2012