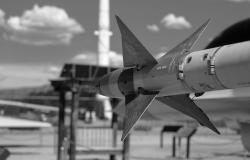 Like asteroids, hundred-year floods and pandemic disease, thermonuclear war is a low-frequency, high-impact threat. In the long run, catastrophe is inevitable if nothing is done − yet each successive government and generation may fail to address it. Drawing on risk perception research, this paper argues that psychological biases cause the threat of nuclear war to receive less attention than it deserves. Nuclear deterrence is, moreover, a ‘front-loaded good’: its benefits accrue disproportionately to proximate generations, whereas much of the expected cost will be borne in the distant future. Recent surveys indicate that the US and Russian publics assign a surprisingly high likelihood to nuclear war. Nevertheless, earlier research suggests that it is probably not believed to be just around the corner. This, along with the absence of easy solutions, encourages governments and publics to give priority to more pressing concerns. The danger is that the pattern will continue clear up to the point that nuclear war arrives.

Brexit and the Environment Bill: The Future of Environmental Accountability
Maria Lee
Special Issue: Brexit - Past, Present and Future