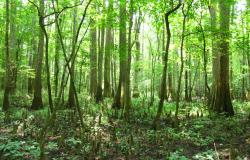 Scientists believe that humanity has already crossed the core planetary boundary for climate change, and is closer to crossing thresholds that trigger abrupt and irreversible environmental changes. Consequently, academia and the international political community should not disregard the prospect of a catastrophic environmental event. However, discussions about climate change usually assume the resilience of potentially deteriorating terrestrial‐biosphere carbon sinks and rarely acknowledge catastrophic climate risk. Reviewing the latest scientific evidence on anthropogenic climate change, as well as the current and projected threats to the resilience of key large forest biomes, and combining them with the profound political frailties of the Paris Climate Agreement, this article argues that catastrophic climate risk is much more serious and likely than most of humanity is able to perceive and should thus be seriously considered. It emphasizes the massive gap between science and political action and how cognitive, cultural, institutional, and political limitations hinder our capacity to envisage, prevent, and ultimately manage catastrophic climate change. The article concludes by briefly raising awareness regarding the role that academia should play in catastrophic climate risk reduction.

Into the Void: International Law and the Protection of Animal Welfare
Steven White
Vol 4, Issue 4, November 2013