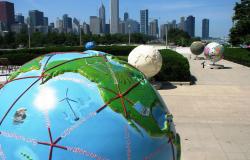 Over the past few decades, cities have repeatedly demonstrated high levels of ambition with regard to climate action. Global environmental governance has been marked by a proliferation of policy actions taken by local governments around the world to demonstrate their potential to advance climate change mitigation and adaptation. Leading ‘by example’ and demonstrating the extent of action that it is possible to deliver, cities have aspired to raise the ambition of national and international climate governance and put action into practice via a growing number of ‘climate change experiments’ delivered on the ground. Yet accounts of the potential of cities in global environmental governance have often stopped short of a systematic valuation of the nature and impact of the networked dimension of this action. This article addresses this by assessing the nature, and challenges faced by, urban climate governance in the post‐Paris era, focusing on the ‘experimentation’ undertaken in cities and the city networks shaping this type of governance. First, we unpack the concept of ‘urban climate change experimentation’, the ways in which it is networked, and the forces driving it. In the second and third parts of the article, we discuss two main pitfalls of networked urban experimentation in its current form, focusing on issues of scaling experiments and the nature of experimentation. We call for increased attention to ‘scaling up’ experiments beyond urban levels of governance, and to transformative experimentation with governance and politics by and in cities. Finally, we consider how these pitfalls allow us to weigh the potential of urban climate ambition, and consider the pathways available for supporting urban climate change experimentation.

The World Bank is Getting ‘Shared Prosperity’ Wrong: The Bank Should Measure the Tails, Not the Average
V. Nicholas Galasso
Vol 6, Issue 3, September 2015