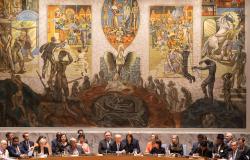 Canada, Ireland, and Norway are vying for two non-permanent seats on the United Nations Security Council for 2021–22 with voting by the UN General Assembly to take place in June 2020. An added dimension to the contest is that Ireland’s bid is part of a long-term strategic Global Ireland 2025 vision to increase its profile, influence, and position in the world, and to act as a buffer in a post Brexit world. This paper examines the past records of the three candidate countries in the areas of peacekeeping and nuclear weapon; women, peace and security; and development aid. It also assesses Ireland’s UNSC bid as part of its broader foreign policy strategy to double the scope and impact of its global footprint by 2025.

Parker - Ireland’s Global Strategy and competing with Norway and Canada for a seat on the UNSC.pdf417.98 KB