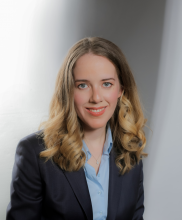 Marion Laboure is a senior economist and market strategist at Deutsche Bank, a lecturer at Harvard University, and a recognized expert in financial technology (fintech). In addition to designing her own financial technologies course at Harvard University, she speaks extensively about payment systems, blockchain, and digital currencies at conferences and seminars. She has won several awards for excellence in teaching, and she received two first prizes from the American Actuarial Society. Revue Banque nominated her as one of six rising stars in finance, and Business Insider named her one of eleven cryptocurrency masterminds. Marion has extensive private sector, public policy, monetary policy, and academic experience, including at the European Commission; Harvard University; the Luxembourg Central Bank; Deutsche Bank; and Barclays. She is the co-author of two books on capital markets, and she has lectured on economics and finance at Harvard Kennedy School, Harvard University, Yale University, Sciences-Po Paris, and University Paris Dauphine.

04 January 2021
Despite specialized press coverage, little is known about the potential socioeconomic implications of financial decentralization. In this column, Marion Laboure and Juergen…

A Tale of Tech Giants, Tax Dwarfs and Sovereigns

12 September 2018
Juergen Braunstein and Marion Laboure explore what countries moving to tax the tech giants could do next. Under Austria’s presidency the EU is stepping up plans for an EU wide…

Are Banks Doomed To Disappear?

03 July 2018
We are entering an era of increased competition between incumbents’ banks, insurance companies and fintechs. While banking and insurance business models haven’t evolved…

The AI Advantage of Nations in the Fourth Industrial Revolution

17 April 2018
Like revolutions in the past the on-going AI revolution will produce winners and losers. The first industrial revolution in the 18th century changed the world of production…

Will Digital Currencies become the Next (Broadly Accepted) Currencies?

11 October 2016
Marion Labouré and Juergen Braunstein examine the structural drivers of recent turns towards populist and extremist politics, and offer Sweden as a role model. The recent Brexit…