Can we Really Change the Tech Sector? 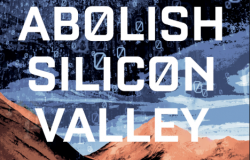 Abolish Silicon Valley: How to Liberate Technology from Capitalism by Wendy Liu. Repeater. 2020.

Amongst the turmoil of recent years, there are perhaps two broad overriding lessons. The first is that people find it difficult to admit when they are wrong. The second is that technology will perform an increasingly powerful role in whatever shape the social world ends up taking.

As a start-up entrepreneur who reinvented herself as a political writer, Wendy Liu’s new book Abolish Silicon Valley concerns itself with both of these lessons. After exploring what she now sees as her misguided acceptance of tech sector logic, Liu’s conclusion is that we need to make radical and profound changes to the relationship between technology and capitalism if we wish to stop the more damaging social consequences of Silicon Valley’s actions.

Liu’s book carefully describes the experience of being immersed in the tech sector. From building up her skills as an open-source coder, through to interning at Google and then onto the struggle of building up her own tech company, the book hinges on Liu’s growing discomfort with what she was witnessing. Left cold by the shiny clamour of the tech world, Liu’s enthusiasm was replaced by a profound political realization that the particular modes of entrepreneurship that fuel the tech sector are limiting what is possible, and even causing social harm.

Implicitly, Abolish Silicon Valley is a story of Liu’s shifting perspective on meritocracy. To use the terminology of the tech start-ups, she makes a ‘significant pivot.’ There is no great epiphany, but a slow wearing down of the sheen of tech culture. The personal is indeed political, and disillusionment even more so.

Absorbed in tech culture and its ‘bubble of irrational exuberance,’ Liu’s faith in its ideals began, steadily, to fall apart. She became lost amongst the uncaring and hyper-competitive world of Silicon Valley. Given the book’s objectives, it is perhaps not surprising that the ethics, motives and approach of much of the tech sector are painted in a shadowy light, with the aims of Silicon Valley described as ‘disruption for the wrong reasons.’

Most of the book takes the form of memoir, but it culminates in a chapter that sets out an agenda for change in the tech sector. Liu argues that small changes are not enough to solve bigger problems, and that incremental alterations are far too easy to isolate and counter. Instead, her book argues for an uncompromising overhaul. Silicon Valley is, Liu writes, ‘the logical expression of technological development under capitalism.’ Transforming such an embedded logic is no easy feat.

When it comes to the central question of ‘abolishing Silicon Valley’- which, as a phrase, is a hyperbolic device used to get the reader to think openly about what might be possible - Liu’s book sets out five proposed changes. These suggestions are not as destructive as the book’s title might suggest, but rather alternatives that are focused on freeing technological development from the logic of the market.

The first proposal is to wrestle entrepreneurship away from capitalist ends and redirect it to ‘creating something useful.’ Resourced by public investment funds in which public money would be used to stimulate collectively-beneficial tech developments, the result would be to free software developers from the pressure for short-term financial returns and refocus on use value rather than exchange value.

I wonder though if it is possible for entrepreneurship to be completely detached from the type of capitalism with which Liu has so many issues. In her proposal, competition for gaining market share might still exist, but the focus would be on what’s perceived to be most useful. A marketplace of projected usefulness might end up emerging, substituting one kind of capitalist competition for another, however well-intentioned.

Perhaps what’s more important is that Liu isn’t taking a knee-jerk approach and jettisoning all tech and tech development as an unwanted presence. Rather, the book attempts to think about the social value that tech might bring if its drivers and motivations were remade.

Alongside reclaiming entrepreneurship, Liu also argues for reclaiming work. This is centrally an argument about tackling the vast inequalities of those working in the sector in terms of the type of work being done and the recompense different people receive for it. Working conditions, in this vision, are important for the type of outcomes the tech sector produces. A fairer sector, so it goes, is more likely to lead to technologies that also promote fairness.

Liu’s detailed knowledge of work and workers in the sector leads to a revealing unpicking of the changes that are required if work is to be reclaimed in this way. She is especially interested in the precarity of tech work, and her proposals also encompass the broader problems of pay variation, access to quality jobs, and the rights of those who are used for temporary or piecemeal work.

Her third and fourth proposals concern ownership: reclaiming public services and reclaiming intellectual property. Public funding is crucial here, as is the move toward tackling inequality through social structures and services. As well as enhancing public services, Liu seeks to place the tech that’s produced and the ideas it incorporates into public hands. We see here how Liu is proposing changes to the tech sector that are based on wider changes to social and capitalist structures, especially around ownership.

Finally, she argues for the reclaiming of culture, an ambitious but probably necessary step if the other aims are to be realized. Here Liu’s position might be seen to move towards a Frankfurt School-type perspective, with the extremes of commodification identified as having particularly damaging implications. In this section of the book Liu hints at a rereading of critical theory’s critique of the profit motive for the types of large-scale data extraction, targeted advertising, and platform media that are so now so prominent.

These proposals, despite being covered only briefly in the book, aim to alter the tech sector in radical ways, but will they do enough to rework the ideals and logics that underpin it? Material change is likely to prove difficult without some sort of ideological change. In other words, it’s unlikely that the sector will follow the path Liu lays out without a major change in what she frequently calls their own ‘belief in tech.’ That’s the issue that Liu’s book sets up for the reader: if the pivot towards a more critical view of meritocracy was so fraught for Liu, then can we really expect it to take hold in the tech sector as a whole, or among those who are even more thoroughly immersed in its culture?

Perhaps Liu’s observation about Silicon Valley being ‘entwined with the mechanics of contemporary capitalism’ is important here. It tells us that change in the tech sector can only be produced by changes in the direction of capitalism itself. Liu’s book makes us realise just how hard it is to imagine technology outside of the type of capitalist structures from which it currently emerges. Thinking about new horizons is the task she sets for us, so it isn’t just the personal that is political; storytelling can be political too.

David Beer is Professor of Sociology at the University of York. His books include Metric Power, The Data Gaze and The Quirks of Digital Culture.

This first appeared on OpenDemocracy.