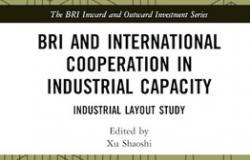 This book is a codification of economic planning policy from the National Development and Reform Commission of China. As such it represents the highest-level and most complete attempt at planning economic development in third countries since the Soviet Union. This is the economic blueprint for the Belt and Road geopolicy. International Capacity Cooperation is the practical trade and industry policy underpinning the political policy. However the institutional realities are that China is less exporting its economic model and rather exporting its political model, and for this, the policy looks doomed to falter in its current form.

The book was first published in Chinese by China Machine Press in 2017 as ‘一带一路”与国际产能合作：国别合作指南’, now marketed as ‘The Countries' Cooperation Guide of the Belt And Road Initiative And International Capacity Cooperation’. But the most important variable in this study is the authors themselves. Xu Shaoshi was, at the time of Chinese publication, director of the National Development and Reform Commission, the highest economic planning body in China and the successor organisation of the GOSPLAN-mirror, the State Planning Commission.

The array of co-editors and actual authors of this book are also either top-ranked Party Cadres or promising policy specialists. While Xu has now been put out to pasture on various CPPCC and NPC committees, He Lifeng has taken over as NDRC director, Ning Jizhe is director of the National Bureau of Statistics, and Wang Xiaotao is China International Development Cooperation Agency (CIDCA) director. CIDCA is China’s new ‘foreign aid’ agency that emerged from the 2018 public administration reshuffle. But in reality, there is no foreign aid from China: foreign economic cooperation is entirely state-directed foreign direct investment, industrial policy, industrial capacity transfer, and policy banking. This ICC system that the book describes is a new trade and investment architecture which presents a dual challenge to both Bretton Woods and the archaic Western aid regime.

International Capacity Cooperation as a policy itself was launched in 2014 as the practical geoindustrial economic architecture for Belt and Road and an upgrade to the Going Global foreign economic policy of ‘Going out’ (走出去) and 'Bringing in' (引进来) that had guided China’s foreign policy since 1999. ICC emerged from Going Global via Party and State leading groups in 2014, meaning it was likely in development in 2013 alongside Belt and Road, probably within the State Belt and Road Leading Group while it had been driven by the excellent policy mind of Zhang Gaoli.

The early ICC policy trail included a major State Council announcement in 2015, Guiding Opinions on Promoting International Capacity Cooperation and Equipment Manufacturing and later the more holistic 13th Five-year Plan on International Capacity Cooperation. This sectoral ICC Five-year plan has remained classified, but the shadow of it was visible through its use within other documents and systems within the public administration. The first Xi administration was counterintuitively characterised by an oversupply of transparent policy – the administration was releasing so much policy that it was impossible for any institution to read it all. This now appears to have been a deliberate political manoeuvre. Running a command economy needs a huge amount of public administration communication, both horizontally and vertically. It is impossible then to run a clandestine foreign economic policy, but it can be obfuscated by sheer volume of data.

ICC was actually quite a good idea. Industrial overcapacity in China’s national economy had meant that too many factories were sitting idle, not producing anything. But from a global economy perspective, there cannot be too much cement, glass, steel or aluminium, because so many countries still have preindustrial or under-industrialised economies. The policy idea with ICC was to reduce China’s low to mid-range stock of factories, freeing up capital to be reallocated to chase higher-end technology chains and clusters. This would also bring much needed industrial infrastructure down the global economic value chain to countries whose economies were hungry for investment in low and mid-tier industrials. Bringing whole industrial clusters and economies of scale to these countries would help them to kick-start their own industrialisation drives and mimic the roaring Manchester-style state-capitalism of China’s development program through the reform era.

There were some problems though. China is still a two-speed economy: coastal China is approaching OECD-level incomes while rural and Western China remain deep in the 20th Century. China had for decades tried to use industrial policy and spatial planning policies to move productive economic forces into Central, Northeast and Western regions. But industrial policies such as Develop the West had not worked. Moving internal industrial and commercial policy to international trade and geoindustrial policy could leverage Ricardian comparative advantages into the mix. But treating the countries of Central Asia, Middle East, East Africa and Eastern Europe as economic units analogous to China’s domestic provinces was a political risk. It was not lost on host economy governments that China was using ICC to avoid reform of its domestic economic development program and to foist the same institutional problems onto them.

The publication of this book now in English is a great time capsule, to see what was being published on ICC by the NDRC in 2017 when ICC was fresher and there was real optimism in China’s foreign economic policy-making. Ultimately, reading the policy prescriptions in retrospect from 2020 we see an exercise in poor policy communication and failed spruiking of damaged goods as investment opportunity. The publication, mirroring the policy deployment, is also quite messy, with the inside cover copyright for 2021, despite being published in 2020. 67 illustrations may conjure images of well-presented maps of geoeconomics and geopolicy. Unfortunately almost all figures are poorly produced excel-generated graphs. And the few maps produced here are closer to a 1950s Soviet textbook than a 21st Century geoeconomic masterplan. The prose is bad and cumbersome to read. And the brick structure of the book is reminiscent of China Development Bank’s bond market reform doorstops of the early 2010s. There were many exciting, simple to understand, and grand-vision policies coming out of China throughout Xi’s first term, but this attempt at holistic codification so smoothes the track that any interesting variation is lost on the new reader. Overall, this is one for the libraries: a useful reference book for future historians, but not an incisive view into the contemporary policy-making process in 2020 China.

Like other political waves that have reached into the heart of Eurasia before receding again, this International Capacity Cooperation policy will likely only add to the marks left by external grand strategies in the region. Bringing techno-industrial policy development to countries that have economically drifted through the past three decades of globalisation was a great idea. But the whole-of-government approach to a Eurasian continental industrial complex has all the hallmarks of another GOSPLAN failure.