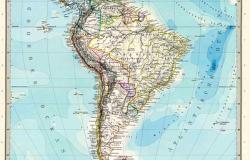 A new GP / EGG Essay from Carlos Fortín, Jorge Heine and Carlos Ominami asks what will the impact of a Second Cold War be on Latin America?

The COVID-19 pandemic has brought to the fore the helplessness of a fragmented Latin America, unable to cope with global challenges. Although the virus took time to reach the region, once it arrived, it did so with a vengeance. It triggered a chaotic response, with each country haphazardly acting on its own. Borders were closed overnight, tens of thousands of travelers were left stranded, governments   competed for medical equipment, and almost no inter-governmental coordination took place on an issue that, by definition, transcends national borders. In September of 2020, with 8 per cent of the world’s population, Latin America had 30 per cent of world’s fatalities from the pandemic.

That shouldn't have been the case.  A decade ago, there were regional cooperation agreements on health under the Unión de Naciones Suramericanas (UNASUR) and  the Mercado Común del Sur (MERCOSUR, which could have helped alleviate the impact of this crisis, the largest that humanity has experienced since World War II, according to United Nations Secretary-General Antonio Guterres.

Although it may last a couple of years, this pandemic will eventually pass. What will not pass is the helplessness of a fragmented region that finds itself in its weakest position in many decades. Far from reducing international tensions, the pandemic has exacerbated geopolitical rivalry.  It has also given a strong boost to a Second Cold War, this time between the United States and China. While US authorities talked about the "Chinese virus,"   and the "Wuhan virus," a Chinese foreign ministry spokesperson suggested that the virus might have been generated by the United States.   Washington has expelled numerous Chinese journalists from the United States, an action Beijing has reciprocated. Several bills have been introduced in the United States Senate to restrict trade, investment and scientific research and student flows with China.

What will the impact of a Second Cold War be on Latin America?

Will we see a repeat performance of what happened in the four decades of the first Cold War, in which the lack of regional unity and collective action left it at the mercy of the two superpowers of the time, paying  a very high price for it ? Or is it that, seventy years later, these  countries, now presumably more mature and developed,  can manage their own affairs without being manipulated by others  ? What should they do to achieve this goal?

The purpose of this essay is to answer that question, perhaps the most important facing the region today. The first section below examines what is triggering the Second Cold War;  the second outlines why this puts Latin America at a  crossroads; the third proposes active non-alignment as the sensible global policy option; and the fourth elaborates on what this would entail, in terms of policy recommendation, and provides some  brief  concluding thoughts.

From Soaring Gas Prices to another World War, Economic Sanctions can Lead to Dire Unintended Consequences