Did British Colonial Rule in Africa Foster a Legacy of Corruption among Local Elites?

By Merima Ali, Odd-Helge Fjeldstad and Abdulaziz B. Shifa - 02 November 2020 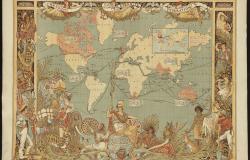 Corruption is considered one of the main contributors to Africa’s development challenges, but less is known about the determinants of corruption and why the levels of corruption vary between countries. A new study finds that the legacy of colonial rule and its influence on local elites (chiefs) may be part of the explanation. The authors present empirical evidence that British colonial rule in Africa may have fostered the corruption of chiefs and undermined society’s trust in them.

Our research focuses on chiefs because they remain influential on a wide range of governance issues in contemporary Africa. In their common role as custodians of land, chiefs often exert influence over the allocation of land and the distribution of land rents. This could have significant welfare implications in many African societies, due to the dominance of agriculture and natural resources in the economy. For example, farmers’ patronage network with chiefs is shown to influence the security of property rights over agricultural plots and the level of agricultural investment.

The accountability of chiefs is also an important source of concern in the equitable distribution of mining royalties, where chiefs may enter into deals with mining companies on behalf of rural communities, and often face serious corruption allegations. Chiefs further engage in a number of governance roles, such as the administration of justice and contract enforcement, the collection of taxes, the provision of public goods and the implementation of aid projects.

In addition to their direct role in local governance, chiefs exert influence on the central state via lobbying as well as mobilising their local networks and resources for election campaigns. They also interact with the central state, acting either as substitutes or complements to the central state.

Thus, research focusing on chiefs is well warranted since their accountability is likely to have considerable implications for the quality of governance and economic development in many African communities.

British colonialism and the empowerment of chiefs

The existing empirical literature in economics often emphasises association between British colonial rule and lower levels of corruption. However, in the historical context of Africa, Britain’s system of colonial rule may suggest a legacy of higher corruption among chiefs. In colonial Africa where the central state was weak, colonial powers controlled the population mostly through chiefs, instead of through the central state. Thus, the formal legal systems introduced by the colonial powers were applicable largely to the central state and had limited relevance to governing the majority of the population.

The British colonial rule gave greater autonomy to chiefs than they had in precolonial times, which bolstered their power and undermined their accountability to the local population. Scholars of African history have long noted that the legacy of Britain’s system of colonial occupation (as compared to, for example, that of the French) contributed to strengthening the power of chiefs in anglophone countries. For example, based on a detailed historical comparison of chiefs in ethnic groups that were partitioned by colonial borders in West Africa, political scientist William F.S. Miles concludes that chiefs under British colonial rule emerged at independence with greater power and authority vis-à-vis the national government than did their counterparts in former French territories.

The entrenchment of chiefs’ power under the system of native administration during colonisation, therefore, raises an important question of whether the legacy of British rule contributed to an increased level of corruption among chiefs. This question is addressed in our article recently published in the Journal of Economic Behavior and Organization. The focus on chiefs, as opposed to the formal state, is a notable departure from much of the current literature on the determinants of corruption.

We examine two outcome variables from the survey data. The first variable measures the prevalence of corruption among chiefs and is based on respondents’ perceptions of the extent of corruption by traditional leaders in their community. The second outcome variable reveals the level of public trust in traditional leaders, based on the responses to a question on how much people trust these leaders.

These empirical patterns suggest that the empowerment of chiefs under colonial rule have a more potent legacy than the formal legal system that colonisers left behind. Our finding of a positive association between British rule and the level of corruption among chiefs underscores an important qualification to the empirical patterns in the existing economics literature on the legacy of British rule on corruption.

Image: Norman B. Leventhal Map Center via Flickr (CC BY 2.0)