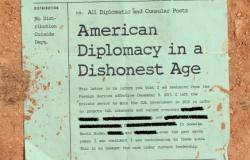 The Dissent Channel takes the reader along Elizabeth Shackelford’s journey of disillusionment with the U.S. State Department. She starts as an idealistic foreign service officer, witnesses the implosion of South Sudan, and ultimately submits a fiery resignation letter. In this insider account, Shackelford explores challenging questions that dominant narratives on South Sudan and American foreign policy have tended to ignore.

Shackelford’s book begins as she arrives in South Sudan, her dream assignment. Though far from luxurious—it had just 35 miles of paved roads in a country the size of France, Shackelford shared the international community’s hope for the newly independent country. After decades of civil war with the north that killed millions, the push for South Sudanese independence became a point of unity in American foreign policy. Human rights activists saw an opportunity for South Sudan to escape Sudan’s abuses, while evangelicals embraced South Sudan as a Christian David taking on the Muslim Goliath in the north. Americans saw the southern army—the SPLA—as freedom fighters and assumed that they should guide the independence process. 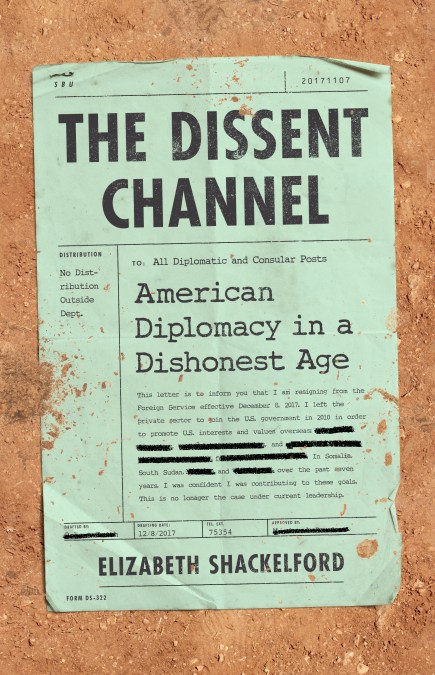 Though Shackelford devotes little attention to South Sudan’s pre-independence history, she notes that the international community’s rosy narrative obscured significant warning signs. During the civil war, tensions flared between the Dinka and the Nuer, the major southern ethnic groups. In 1991, future South Sudanese vice president Riek Machar led his faction of the army in a massacre of over 2,000 Dinka civilians. Large-scale corruption also existed within the SPLA.

Yet nuance rarely sells in Washington. Americans wanted a success story, and when Shackelford arrives in South Sudan in 2013 the US continues to ignore cause for alarm. Tensions between president Salva Kiir and vice president Machar grow, with Kiir’s ability to sustain patronage networks diminishing after an impulsive shutoff of the oil pipeline to the north.

Civil war erupts at the end of 2013. Dinka soldiers largely align with Kiir and attack Nuer soldiers and civilians, while Nuer soldiers aligned with Machar carry out reprisals. With a dual mandate as a consular and human rights officer, Shackelford works around the clock to protect American citizens from the violence while documenting the massive ongoing human rights abuses. Almost all Americans seek to evacuate, and over the course of three weeks Shackelford organizes the evacuation of 1,100 people. Many South Sudanese civilians take shelter in UN protection camps, while civilians outside the camps risk falling victim to massacres.

Shackelford does her best to document these atrocities, but her superiors continue to stand by Kiir, despite extensive records of abuses committed by his forces. Secretary of State John Kerry publicly endorses Kiir’s narrative, blaming the conflict on Machar. President Obama invites Kiir to his summit with African leaders. Shackelford reserves particularly strong criticism for National Security Advisor Susan Rice. Rice had been a strong supporter of the SPLA as South Sudan gained independence and continued to advocate strongly for Kiir. According to Shackelford, Rice worked behind the scenes to block the passage of an arms embargo at the UN Security Council.

Shackelford later takes on positions in DC and then Nairobi. She watches from afar as peace deals fail to address South Sudan’s underlying problems and then fall apart. With her superiors continuing to reject her calls to address the South Sudanese government’s impunity, in 2015 Shackelford decides to take the rare step of filing a dissent channel. Created as a response to diplomats’ anger with the Vietnam War, dissent channels allow foreign service officers to officially criticize government policy. But Shackelford’s dissent channel has little effect, and the Trump Administration eventually takes over. Secretary of State Rex Tillerson drops even a pretense of protecting human rights and seeks to hollow out the State Department. Seeing her work as futile, Shackelford submits a resignation letter that goes viral.

The Dissent Channel challenges a narrative in which the US is blameless for the horrors that have unfolded in South Sudan. While few would still praise Kiir after nearly seven years of conflict, American officials tend to believe that they did everything they could and South Sudan squandered its chance. South Sudanese elites deserve enormous blame for their indifference to their people’s suffering, and Shackelford at times lets Machar off the hook for his role in causing the violence. But Shackelford also shows that the actions of South Sudanese elites were not just in spite of American policy, but often as a consequence of it. Ignoring the complexities of the situation, the US led an independence process that vested unchecked power in a set of predatory political elites. The US then sent the consistent message that the government would maintain American support even if it perpetrated immense abuses. The book reveals that there was significant discontent among foreign service officers with this strategy, but they lost out to more senior American officials. Obama and Kerry were not invested in South Sudan, while the engaged senior officials led by Susan Rice insisted on maintaining a close relationship with Kiir’s government.

Shackelford’s account also provides insight into the dynamics of the State Department. Shackelford’s diligent building of relationships enabled successes like the evacuations of Americans when conflict broke out. However, diplomats on the ground can only do so much when they lack support from Washington. The militarization of American foreign policy and the consequent underfunding of the State Department left Shackelford performing the jobs of two people as a civil war erupted. High ranking American officials ignored her pleas for a shift in policy, and even mechanisms like dissent channels offer little promise if not acted upon.

The Dissent Channel also challenges nostalgia for pre-Trump foreign policy. In comparison to a president who sees international relations as a zero-sum competition and orchestrates foreign policy via tweet, anything can seem better. But Shackelford reminds the reader that a return to normal would fail to address major flaws. When US priorities come into competition, human rights are often the first casualty. Further, the US can be an exceptionally careless hegemon, inserting itself as a central actor in countries the world over and then brushing aside the nuances of local and regional politics. When these nuances inevitably rear their heads, people like South Sudanese civilians are the ones who suffer the worst consequences.

If a new administration takes office next year, it will need more than a return to traditional American foreign policy to address the COVID-19 pandemic, the climate crisis, and the diminished global status of the US resulting from Trump’s presidency and a spotlight on racial inequality. The Dissent Channel represents an important read for those seeking to reckon with the longer-term shortcomings of American foreign policy, particularly as they concern South Sudan. Both the Obama and Bush administrations saw South Sudan similarly: yet despite this consensus the US failed to prevent a civil war that has left over 400,000 dead in a country the US helped shepherd into existence. While many years too late, hopefully this time Shackelford’s input will be given greater consideration.

Tim Hirschel-Burns is a J.D. candidate at Yale Law School.