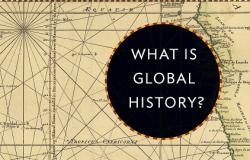 Branko Milanovic explores alternatives to the problem of eurocentrism in economics.

Sebastian Conrad’s book “What is global history?” is in many ways important for economists and economic historians. This is not only because Conrad illustrates the way in which global studies differ from other ways to look at the world (modernization theory, world-systems theory, post-colonial studies), but also because he takes many examples from economics.

The problem of Eurocentrism, defined by Conrad as “Europe/the West.. seen as the locus of innovation, and world history…understood as a history of diffusion of European progress” (p. 74) is especially acute in economics because the very notions of “modernity”, “economic growth”, “welfare” emerged in Europe, were propagated by European thinkers, and were later adopted by thinkers from other regions of the world. What passes for global economic history is thus often a teleology which sees the non-European “peripheral” regions as retracing the steps through which the “core”, i.e. Western countries, have already passed. This is, rather obviously, true of the main variant of Marxism and of modernization theory, and perhaps even of world-systems theory (projection of the economic dominance of Europe and the US in the twentieth century back to the sixteenth, according to Conrad).

This is also true of economic histories that, in their standard format, begin either with colonization and  “the discovery” of the Americas or with the Industrial Revolution. “Interaction” or “connectivity” in these histories means simply, as Conrad writes, interaction with the West, almost never interaction between non-Western parts of the world (e.g. India with Malaya and East Africa, China with South Asia). Some are almost caricaturally Western-centric: David Landes (“The Wealth and Poverty of Nations”), or Daron Acemoglu and James Robinson (“Why Nations Fail”) who, as Peer Vries writes in “Escaping poverty”, present  “a stylized generalization [sic] of a very specific, positive interpretation of the modern history of Great Britain and the USA” and simply reproduce “all the clichés when it comes to Asian institutions.”

But it is also true of books like “Global Economic history: A Short Introduction” by Robert Allen. This is an excellent book, but its approach is very standard: it begins with the Industrial Revolution, England and Western Europe, moves to the Americas only as the United States becomes an economic powerhouse, then introduces Meiji Japan, Czarist and Soviet  Russia, and finally China. Now, Allen can sensibly defend his approach by arguing that it does not privilege Europe (or the West) as such but that it simply retraces economic development measured by an objective criterion: how much above the subsistence is the average income of a society?  This is a general standard, and we go following that standard wherever it takes us. This is a good defense that can  be made also with regard to such classics as Colin Clark’s “Economic Progress”, Angus Madison’s “Contours…” or Paul Bairoch’s “Victoires and deboires”—all of them, in my opinion, brilliant works of global economic history.

However, one could also argue that the seemingly objective criterion that is being used (has the society overcome the level of physiological subsistence for its members?) is itself Eurocentric insofar as the objective of economic growth was born with economic growth itself. The yardstick that we claim to be universal is, on the contrary, a product of a specific era—the Age of Enlightenment and the European Industrial Revolution. Both of them are local or at best regional events. There is no reason why we should take economic growth as the organizing principle to study economic history. We could, it may be argued, equally validly take social stability, or the caste-like inheritance of division of labor, or sedentary-nomadic split as central economic principles and write a book on global economic history from one of these perspectives.

It does seem to me that the latter perspectives are deficient compared to the  “desirable” objective of overcoming the stinginess of nature and generating greater wealth. But I cannot reject the notion that I hold that the organizing principle of a good book on global economic history should be a study of economic growth because I have learned that by privileging one way of looking at economics. We are back to the beginning where the “I” is simply the reflection of the dominant narrative. There is nothing independent there: if the narrative were different, the “I” would have been different.

How should we then write economic history or history of economic thought? For economics which is so intimately connected with Eurocentrism, the question is exceedingly difficult to answer. One way would be, as Conrad mentions, to do comparative history (à la Pomeranz), another would be to take more seriously postcolonial studies--even if they, as Conrad, I think rightly, argues, tend to degenerate into cultural essentialism.  Integration of studies of slavery and serfdom is perhaps a good way for economic history to move toward becoming “global”. This is because slavery and serfdom are global phenomena that long predate capitalism and Western exceptionalism. In fact, when I think of all the global economic history works mentioned in this post, I cannot see any of them integrating or paying sufficient attention to unfree labor.

The approach we should avoid is to pay lip-service to non-Western thinkers by including one or two sentences from their work without any analysis or contextualization. I have seen this done in recent histories of economic phenomena: it is now de rigueur to quote a couple of non-Western authors, mostly (I would guess) by grabbing a few sentences from a Wikipedia entry. It makes a mockery of the entire idea, but it does (formally) satisfy the thought-police who look at the “diversity” requirement as a purely quantitative target: are there quotes from a sufficiently diverse crowd of authors?  (On the other hand, a good example of real substantive engagement with non-Western thinkers is Pankaj Mishra’s “From the Ruins of Empire” that I reviewed here.)