‘Thank you for your cooperation’: Welcoming words for the world’s media 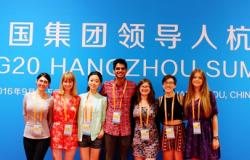 International Media Centre — G20 Hangzhou Summit. As thousands of journalists, policy makers, diplomats and politicians descend on the former Southern Song Dynasty capital of Hangzhou, nobody can fault China’s attention to detail and commitment when it comes to summit security. It’s no surprise that, as China makes its debut as a G20 summit host, officials have spared no expense instating the highest levels of security. Yet, it’s easy to get caught up the summit ‘bubble’ and forget that Hangzhou is a vibrant city whose people have their own character. Despite almost a third of residents having taken the opportunity to go on holiday with government travel vouchers, the city still managed to leave an impression on visiting journalists – present company included. Our team includes people with varying amounts of experience living, working and visiting China and so witnessing how much of Hangzhou’s personality would be visible to foreigners was an exciting prospect. After all, Hangzhou is famous within China for being a popular, picturesque tourist destination and to come to the summit and not see, at least in some form, any ‘authentic’ Chinese culture would be disappointing.

Being based in the G20-recommended hotels, the constant airport-style security checks quickly become taxing, especially when journalists are required to empty the contents of their bags every time they want to enter or leave the hotel. So, the smiling faces of the G20 volunteers provide a welcome reprieve from the steely looks of concentration on the faces of the security staff around the summit venues. There are over 3,900 multilingual G20 volunteers in Hangzhou (both Chinese and non-Chinese), who were recruited from a pool of 26,000 applicants from 15 universities across Zhejiang Province. Their smart sky blue and white uniforms are easy to spot in the media centre and reflect the summit’s modern and well-organised feel.

China is no stranger to utilising its most abundant resource: people power. From the 400,000 Chinese volunteers who provided a range of services during the 2008 Beijing Olympics, to the 20,000 ‘Little Limes’ who helped make the 2014 Nanjing Youth Olympic Games a success, China’s citizens have shown themselves time and again as eager to welcome foreigners to their country. When asked about their training, the G20 volunteers told us that it had started three months prior to the summit, and included courses on first aid, as well as teamwork and organisation workshops. Holding the position of volunteer in itself is impressive in light of the strict recruitment process that requires volunteers to pass TOEIC (Test of English for International Communication). The huge numbers of applicants for these volunteer positions is a testament to the prestige that being a G20 host brings.

The volunteers are a valuable asset for the Chinese government because they are putting the summit’s key aim of inclusivity into practise at the most fundamental level by making foreigners feel welcome. However, despite the smiling faces and kind words we can’t help but feel that something is missing. Between the sterile media centre and the quiet luxury of the journalists’ hotel there is precious little opportunity to even see Hangzhou locals, let alone speak to them. On the few occasions when we did come into contact with locals who weren’t contractually obliged to act in a certain way we were very interested to hear what they might have to say.

The location of the G20 recommended hotels for journalists are a significant distance away from Hangzhou’s biggest tourist attraction: West Lake. During our taxi ride to the lake we took the opportunity to ask our driver what he thought of the G20. His reply came in the familiar script-like and positive tone used by the volunteers: ‘Oh it’s great! It’s really helped to develop the city. Hangzhou thanks the people of the world for giving us this opportunity’. Perhaps not the most objective opinion, but also not surprising considering that it was a taxi called specifically to the hotel for us by G20 staff. It seems that the summit has its own version of the Midas Touch; every face the G20 touches turns into a smiling one, with only positive comments to give to journalists. Our most genuine glimpse into Hangzhou and the true effect of G20 on its residents came on the way back to our hotel, when we caught a taxi off the street. Our driver was reluctant to say too much against the summit once he realised that we were journalists, but when asked for his opinion on the summit’s effect on Hangzhou, his response seemed genuine nevertheless: ‘I’m not sure, it’s difficult to say whether [the summit] has helped ordinary people’.

China’s rich culture may not have been on full display during the summit, but what was clear was its ability to step up and give visitors a pleasant and positive experience. It is notoriously difficult to get delegations from such diverse backgrounds and cultures to agree on policies at a summit like this one, but whether or not the presence of G20 has helped everyone in Hangzhou, the one thing all foreigners can agree on is that China wants to give the world the best impression possible as it solidifies its status as a diplomatic superpower.