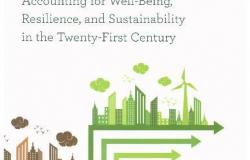 This new book by Éloi Laurent, Senior Economist at Sciences Po Centre for Economic Research in Paris and Visiting Professor at Stanford University, is a welcome addition to a growing body of new economic literature presenting constructive ideas on re-thinking the economy, particularly in the context of climate change. Laurent offers a degree of optimism and opportunity in a subject matter frequently dominated by disaster narratives. Measuring Tomorrow clearly takes the perspective of economic data and indicators in the ‘re-think’ debate. Yet, it has overlaps with Marjorie Kelly’s (2012) ideas on ‘generative ownership’ when discussing ‘valuing what counts’ (Chapter 14) and complements the propositions made by Kate Raworth (2014) on sustainability and wellbeing in Doughnut Economics, when making the case for future resistant indicators (Chapter 2) on wellbeing and sustainability (Chapters 3-13). Last but not least, it deconstructs the validity of the GDP indicator as the overarching measure of economic performance, which might lead humanity totally astray in search of stability and happiness, just like Diane Coyle (2011) questioned it in The Economics of Enough.

The careful and comprehensive historical tracing of dominant economic indicators and underlying datasets is embedded within a broader debate on assumptions and beliefs about what the economy is and what its fundamental mandate should be.   Figure II.1 on mapping and measuring well-being, resilience and sustainability on page 28 provides the key to the author’s economic perspective. This intellectual sensitivity to the power of framing and discourse vis à vis economic indicators is refreshing within a discipline that has reduced indicator construction (and deconstruction) into a technical exercise – as if implying that economic indicators are purely ‘objective’ measures. Laurent’s approach highlights the subjective choice that is always involved when measuring something. The most that can be achieved with economic measures and indicators is ‘positional objectivity’ in the words of Amartya Sen (1993). What we commonly observe (and measure) depends on our position (e.g. as a researcher or policy analyst) regarding the subject. But taking a position, always involves a choice about the type and definition of concepts first. Do we measure ‘labour’ as ‘paid labour’, or also as unpaid labour and voluntary work? Do we agree that measuring ‘sustainability’ or ‘resilience’ matters at all for understanding how the economy performs and how human wellbeing manifests itself? If not, it is unlikely to find any indicators on these issues out there. This critical stance regarding economic measures and indicators is essential in a time in which ‘big data’ rules the world (Chapter 1). Big data may also lead us to find evidence by looking for the keys only where the light is. Therefore, we do agree with Laurent that we ought to train our economics students to develop a fundamentally critical perspective towards economic measures and indicators. At the same time, we need to develop students’ creative skills to construct new indicators according to their outlook on the future.

The book is divided into three parts: Part I is on the new empirical order and how indicators (mis)rule our economic world. This part consists of two chapters that predominantly critique the continuing dominance of the GDP indicator as a measure of economic progress, and everything associated with it.  To support this critique, the 2008-crisis response of the EU is taken as an illustration of how rigid economic rules aimed at “maintaining price stability” (p. 17) misinformed monetary policy, increased interest rates and led to high unemployment rates. This approach contrasts, as Laurent observes, with the EU’s commitment to the ‘Beyond GDP’ agenda and its ultimate objective to let policy targets reflect societal concerns more adequately.

After this prelude, Part II of the book contains the core chapters on mapping and measuring well-being and sustainability, divided over 11 chapters (Chapters 3-13). The indicators addressed gradually move from individual interests such as income, and work, to more shared concerns about health and education, and finally to subjective concerns about happiness and trust. Since collective values permeate institutions, Chapter 9 follows by addressing what constitutes ‘good’ institutions and how to measure those. The focus in this chapter is mostly on ‘good governance’ institutions akin to democratic societies. It does not venture into exploring global institutions for governing common property resources more inclusively or in an environmentally just manner.  In view of the globally shrinking eco-spaces witnessed in the Anthropocene (Gupta 2016), new forms of polycentric governance might have to replace the ‘old’ mono-centric institutions as we know them. Good governance would have to be redefined then to capture these mounting global challenges.

Chapters 10 on material flows and 11 on the state of the biosphere stress the importance of planetary boundaries. However, this is not taken back to the institutionalisation of indicators debate. The fact that the ecological footprint measure and the CO2-emissions indicator are the primary sole indicators of environmental performance (Chapter 12) is telling. There is a clear lack of indicators on environmental performance and its different components and levels of scale. It is true that the Sustainable Development Goals (SDGs) and the aggregate index proposed by Jeffrey D. Sachs and colleagues (2016), could guide countries national policies to embark upon a more sustainable growth path. However, since ‘sustainability’ is a scalar measure, the transformative power of the SDGs themselves should not be overestimated. There is still critical thinking required over and beyond the present SDGs.

In Part III of the book the author brainstorms more freely from the indicator chapters, about ways to realize transformative change by going back to valuing what counts (and counting what values?) in Chapter 14 and making concrete proposals for constructing local resilience indicators. In the end, Laurent optimistically sees the potential for social and ecological transformative change to lie in the hands of citizens. Bottom-up transitions do not meet top-down indicators at present; let us hope they do so in the near future after more people have read Laurent’s book. Taking everything together, this book should be appreciated for its successful attempt to push the boundaries of economic thinking about economic measures and indicators outside the box into new ways of thinking creatively, and with a genuine concern about human wellbeing and sustainability re-positioned at the heart of economics. It is a certainly the kind of economics that we like to teach at the University of Amsterdam.

- Coyle, D. (2011). The economics of enough: how to run the economy as if the future matters. Princeton University Press.

Reducing Inequality: Why Working Together is No Longer Just an Option?