By Reviewed by Mareike Blum and Lena Partzsch - 04 July 2017 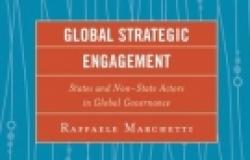 Globalization is a controversial phenomenon; power constellations are shifting and global politics involves actors and dynamics beyond state-based scenarios. According to Raffaele Marchetti, the world has moved toward a clear path of global integration since the end of the Cold War. Many authors studied the phenomena of the “Global Transformations” (Held et al. 1999), “Globalization” (Scholte 2000) and “The Emergence of Private Authority in Global Governance” (Hall and Biersteker 2002) with the end of the 1990s. However, since then, the path of global integration “under uncontested American leadership” (p. 161) has begun to be questioned. These developments make this recently published book an interesting read and innovative contribution to the debate on state and non-state actors in global governance.

The author includes critical perspectives and theories in this part of the book, while allowing himself a predominantly liberal and refreshingly optimistic understanding of globalization. Careful readers may already suspect his ambivalent attitude toward academic research, when he refers only to quantitative and economic methods to measure globalization, although he himself presents a book based on qualitative methods (in particular, a literature review). Marchetti is constantly concerned with adding a political perspective to the academic debate.

The second part of the book outlines economic and socio-cultural dimensions of globalization. While other scholars have already shown how the Washington Consensus and Bretton Woods agreements gave birth to the present-day world economy in the 1990s, Marchetti presents the European Consensus and the Beijing Consensus as essential to understanding the more recent historic trajectory and the actors that have facilitated its consolidation. According to Marchetti, the European Consensus has added principles of poverty reduction, democratic values and accountability of developing countries for their own futures to the American version. By contrast, the Beijing Consensus, which decouples free markets from democracy and human rights, has been advanced as a sovereign alternative to the American version of globalization. Marchetti explains how divergent interpretations of globalization lead to different understandings of the state’s role and how this plays out in social life, including the recent rediscovery of the national and local dimensions of politics.

According to Marchetti, the fifth model has become reality. He describes the new types and roles of non-state actors in this a-polar world system. To him, in this system, MNCs are the most significant transnational actors in terms of actual ability to shape politics. However, they compete with CSOs to provide technical assistance to state governments, raise funds, formulate regulatory decisions, and implement programs and public policies. They further provide services, monitor international agreements, resolve disputes and enforce decisions. Increasingly, they are joined by sub-units of nation-states, in particular, regions and cities. Marchetti describes the resulting cleavages between globalism and localism, especially with regard to the diminishing significance of states with both trends.

Taking an actor-centred perspective, the book’s main interest tends to be giving strategic advice in terms of risks and opportunities to the diverse actor groups. It however pays tribute to (post-) structuralist and constructivist studies by presenting the four normative master frames of (1) Neo-liberalism, (2) Cosmopolitanism, (3) Localism and (4) Civilizationism. While Neo-liberals understand globalization to be based on economic market integration and Cosmopolitans highlight origins in political and civic aspects of life, both share a positive perception of globalization. By contrast, the two latter frames are anti-globalization: Localism recognizes local traditions and cultures as the social bond, and Civilizationism reflects Huntington’s thesis of a “clash of civilizations”. While Marchetti mentions the possibility of dialogue among cultures and religions, following Huntington, he clearly warns against the risks of increasing conflict and competition in the future.

In the last part of the book, Marchetti’s observations and analyses of globalization culminate with policy advice. He points to those who have so far not benefitted from globalization and warns that democracy will fail if not applied at the global level. The United Nations system, which assumes that the demoi is rooted in the national context, is contrasted with a functionalist model and a truly cosmopolitan model, both based on the assumption that there is a transnational demoi. For the world to come, Marchetti sketches five scenarios ranging from a liberal nature that considers globalization as an unstoppable movement, to the formation of differentiated areas of development.

Unlike earlier books on globalization and non-state actors, Marchetti comes back to a state-centred perspective at the end of the book. He concludes that, while the trends show that the United States has lost its hegemony and the EU is still suffering from economic crisis, BRICS countries, especially China, are gaining power. He raises the questions of whether the EU and China will be able to fill the void left by the old hegemon and what risk of a world conflict exists. This book provides “keys of interpretation” for everyone to consider these questions. In this sense, it is clearly making a statement in favour of globalization.

Time and space in the study of international organizations: An introduction