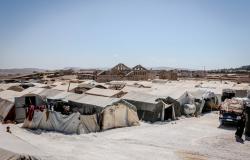 Juliet Parker, Director of ALNAP (the Active Learning Network for Accountability and Performance in humanitarian action), summarizes its new State of the Humanitarian System report 2022.

“I am here to sound the alarm:  The world must wake up.”

“We are on the edge of an abyss — and moving in the wrong direction.”

UN Secretary-General Antonio Guterres offered a stark warning to the UN General Assembly in September 2021.  Today, ALNAP, a global network of humanitarian agencies, publishes its flagship report, the State of the Humanitarian System and our conclusions provide comprehensive evidence to corroborate his rallying cry.

The State of the Humanitarian System report is the longest-running evidence base on the performance of the humanitarian system.  Drawing together 4 years of analysis and data, the report sets out what we know about where the humanitarian sector is making progress and where it is not.

The challenges facing humanitarians are significant and set to increase.

Here are some of the main trends we’ve seen over the past four years:

Demand for humanitarian assistance has increased significantly.  This is for four main reasons:

The international humanitarian system expanded to meet this demand. The system, in terms of the amount of money and numbers of organisations and in-country staff, is larger than it has ever been. International humanitarian assistance (IHA) reached an estimated $31.3b in 2021, almost doubling in the last decade.  The number of humanitarian staff working in crisis contexts has increased 40% since 2013, to around 632,000 people, 90% of whom were nationals of the countries in which they worked.

As demand for humanitarian assistance rose, humanitarians faced pushback from states and international support for humanitarian norms declined, making it harder to reach those most in need. Deepening tensions between Russia, China and the West affected the ability of the multilateral system to address climate change, resolve conflicts and uphold international law. Democratic norms were eroded by the actions of several governments and armed groups around the world, who flouted the human rights of their citizens and undermined humanitarian response.

Resources and effort are heavily concentrated in a very small group of donors, agencies and countries. Almost half of IHA comes from the top five donor governments and by 2021 31% came from the USA alone, making this support vulnerable to changes in government or foreign policy.  Almost half of IHA goes to three UN agencies (WFP, UNHCR and UNICEF; much of this is then passed on to other agencies). Meanwhile, despite the commitments made to support localisation at the World Humanitarian Summit in 2016, the proportion of funding to local and national actors actually fell, from 3.3% in 2018 to 1.2% in 2021.

Where data is available, we can see that humanitarian aid is generally effective at achieving positive outcomes for people in crisis; cash programming and the food security and nutrition sectors provide good evidence for this. However, in many crises, while people found the support provided to be useful, the gap between what the system offered and what people actually wanted seemed to widen. As more people experience protracted crises with longer term needs, aid recipients in Yemen, DRC, Bangladesh and Venezuela said aid that was repeatedly short-term was of less relevance to them.

In addition to using existing criteria for assessing the humanitarian system’s performance we asked affected populations what they wanted to measure.

Aid recipients told us the humanitarian system should be assessed by whether aid goes to the ‘right people’, and how much voice they have in decisions that affect them. Decisions about who gets aid remain unclear to people in crisis, and in several contexts the traditional humanitarian principle of providing aid only to those ‘most in need’ runs against cultural practices of sharing resources across a family or community.

There’s so much more in the report; about the views of people affected by crises, about the power of social and community responses and other organisations outside the formal system, about anticipatory action and protection, and about the pace of changes to encourage localisation, diversity and equality.

To sum it up, the State of the Humanitarian System report paints two pictures:

One where the work of the global humanitarian system is being undermined by a fractured, conflict-ridden international community, making it increasingly difficult to get assistance to those who need it.

And another of a system with long-established funding models and ways of working, struggling to navigate the changes it needs to become more agile, more locally-led, and able to anticipate and adapt to increasing numbers of climate-related disasters and long-term protracted crises.

How can the humanitarian system continue to reach all those who need its support in an increasingly divided world; and how can it adapt to new and cascading crises in a way that provides dignity and hope for the people it aims to serve?

At ALNAP our aim is to provide a space for learning and reflection within the humanitarian sector, and in that spirit, I hope this can be the start of a conversation about what humanitarians can do to implement the lessons of the report and help us all to take a step away from the edge of the abyss.

This first appeared on Duncan Green's blog From Poverty to Power.