Heading to Twenty: Perils and Promises of WPS Resolution 2493 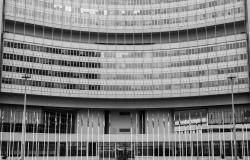 As has characterised the UN Security Council’s women, peace and security agenda (WPS) since its adoption, the lead up to its twentieth anniversary next year is becoming defined by a contrasting set of perils as well as promises that have beset the agenda to date. The adoption of Resolution 2493 (2019) at the Open Debate on WPS on the 29th October, the tenth WPS resolution, recently brought these dynamics into stark relief. Questions abound about the UNSC as the right place for advancing women’s rights in conflict, with the growing pushback against global normative advancement on gender equality now particularly felt in the Council, on top of the challenges presented by its own particular political dynamics. In this article Catherine O’Rourke and Aisling Swaine detail the challenges, and why nevertheless, there may be some room for hope in aspects of the most recent resolutions, if allowed to be brought forward.

The Push and Pull of Normative Advancement

Evident in the political negotiations on the adoption of Resolution 2467 (2019) and Resolution 2493 during the two most recent debates on WPS have been difficulties in maintaining, or even – dare we hope – progressing the language and thematic rights issues underpinning WPS.  Resolution 2493, tabled as a resolution focused on the WPS implementation, falls far short of setting out a clear and ambitious path to achieving the aspirational and operational elements of its preceding resolutions.

Among the many impediments to advancing implementation is the succumbing of debate in the UNSC to the same push-back over language on gender and on sexual and reproductive health and rights (SRHR) that has marked the UN General Assembly, and particularly in the Commission on the Status of Women. While the spectre of conservativism was seen in deliberations over sexual and reproductive health services in Resolution 2122 as far back as 2013 (see statement from Guatemala), outright contestation and threats of veto by the US featured in the adoption of Resolution 2467. Re-surfacing in negotiations towards Resolution 2493, the US not only blocked SRHR, but the shrinking space for civil society was reinforced by retraction of pronounced support for human rights defenders by China and Russia, that had been included in Resolution 2467.

While statements such as the UK’s in support of civil society were an important counter, their admission that “civil society, and especially women at the grass-roots level, are responsible for making the Council’s resolutions a reality on the ground” is telling in the enduring need to impress upon UNSC members that they and UN member states are primarily responsible for implementation of their resolutions, with civil society of course playing a critical role.

Of critical importance through these dynamics is the leadership shown by South Africa during negotiations over the two most recent resolutions.  Resolution 1325 (2000) was lauded as ground-breaking, not just because it brought critical gendered concerns to the UNSC for the first time, but also because the first WPS resolution was adopted under the Presidency of Namibia, an African state. The significance of the adoption of Resolution 2493 by another African state should not be overlooked: it is positive that South Africa pushed forward and there is hope given the leadership on women’s rights and gender equality coming from many Africa group states. South Africa has been vocal on the problems presented by the divisions in the UNSC, challenging it to  “demonstrate a discernible transition from rhetoric to reality.”  The “welcome return to a consensus” on WPS established by Resolution 2493 was noted by South Africa in the most recent debate. However, while important following the abstentions in Resolution 2467, if that consensus is prioritised over women’s SRHRs in contexts of conflict, there will remain severe impediments to the promise of Resolution 1325. When consensus is the lowest common denominator, bold new approaches on WPS appear distant.

The Potential of Resolution 2493

Resolution 2493 brings the first mention of the need for “context-specific approaches” to the implementation of the WPs agenda. While largely tied to women’s participation, it does signify some acknowledgement of the nuance that is required for implementing a broad agenda to a range of differing societies and conflicts.  Nuance is an essential step forward towards implementation beyond the ‘one-size-fits-all’ and broad-brush approach that has been necessary to garner state engagement with ‘women’ in international security.  It should be used to acknowledge contextual differences in global policy encounters with national level realities.   Moreover, evidence is emerging of the need to qualify understandings of conflict-related sexualised violence from a context-specific approach, ensuring that the narrow ‘strategic rape’ framing offered by the UNSC does not solely define approaches to preventing and responding to violence against women in conflict.

A role for regional organisations in the WPS agenda was identified as early as Resolution 1820 (2000), and repeated in several subsequent WPS resolutions. The relevant provisions have, however, been largely exhortatory, encouraging regional organisations and their leaders to engage with WPS and ensure women’s representation. Resolution 2493, by contrast, has brought greater specificity to the actual and potential role of regional organisations in three respects: regional organisations are encouraged to first, convene regional meetings with government and civil society to review implementation of the WPS agenda to mark the twentieth commemoration; second, to identify “practical and measurable steps” for fully implementing the agenda; and third, to report on this process during the annual open debate of the UNSC. The emphasis on regional organisations arguably reflects trends in international law more broadly, in which international human rights treaties have begun to permit and encourage ratification by regional organisations, such as the UN Convention on the Rights of People with Disabilities and the Council of Europe Convention on preventing and combating violence against women and domestic violence. Indeed, the UN Charter envisages such “regional arrangements” for the advancement of peace and security under Chapter VIII.

Nevertheless, despite the UN Charter envisaging a role for ‘regional arrangements’, the mechanisms by which the UNSC relates to, cooperates with, or holds accountable regional organisations on WPS do not currently exist. Indeed, even which ‘regional organisations’ are in fact envisaged here is highly debateable. The modalities of how such a regional approach to a UNSC agenda is intended to proceed is very unclear, perhaps intentionally so. Ultimately, in line with the UNSC’s emphasis on the importance of civil society in implementation, this turn to regional organisations might reasonably be viewed as another effort by the UNSC to delegate its implementation responsibility to other (ill-defined) actors and entities.

The future of the WPS agenda

Resolution 2493 is a salutary reminder that progress is not linear and that backsliding on WPS is not only possible, but likely. What does all of this say for the future direction of the agenda? In its statement to the open debate South Africa noted that “Our contributions all indicate that we know what must be done — perhaps we need to devote a sharper focus on why we are failing to act in pursuit of agreed objectives.” This contribution foregrounded and reflected the political obstacles to progress on WPS at the UNSC. The contemporary focus on implementation as we build to the twentieth anniversary is appropriate, but implementation needs to start from a bold vision of WPS as initially captured in Resolution 1325, and not from the lowest common denominator of the contemporary inauspicious political environment. In times of such deep divisions between, and retrenchment by, key P5 members, the role for non-permanent members committed to a progressive vision of WPS – such as South Africa – is all the more important.

Catherine O'Rourke is Senior Lecturer in the School of Law and Gender Research Coordinator at the Transitional Justice Institute. She researches, teaches and engages in policy work in the fields of gender, conflict, transitional justice and international law. Her monograph Women’s Rights in Armed Conflict under International Law is currently in-press with Cambridge University Press and an output of the UK DFID-funded Political Settlements Research Programme. She works with the Irish and UK governments, the United Nations and several non-governmental organizations in policy work related to her expertise. She is regularly commissioned by intergovernmental and non-governmental organizations to conduct expert research, such as UN Women and the Office of the High Commission on Human Rights, and the International Criminal Court Trust Fund for Victims. @DrCORourke

Aisling Swaine is Associate Professor of Gender and Security at the Department of Gender Studies, London School of Economics. Aisling’s research and teaching interests are in the areas of feminist legal theory and gender theory of armed conflict, international security and peacebuilding. Her work is concerned with feminist examination of international law and global normative developments relating to armed conflict and peacebuilding. Her recent monograph Conflict-related Violence Against Women: Transforming Transition (Cambridge University Press, 2018) is an output of the UK DFID-funded Political Settlements Research Programme. Previously, Aisling worked with the United Nations and international NGOs in humanitarian and post-conflict recovery settings globally, as well as at international policy levels with UN Women and the Irish Department of Foreign Affairs. @AislingSwaine

This first appeared on the LSE's Women, Peace and Security blog.