D-Day 75 Years on: ‘Special Relationship’ Forged on the Beaches of France now poised to Enter a New Era 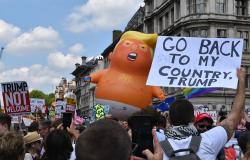 Sean Lang explores what lessons Trump might have taken away from the D-Day ceremonies and what they may mean for the future of global cooperation.

In 1944 the blimps above London were barrage balloons – in 2019 the blimp above the capital is a giant caricature of the US president, Donald Trump, as a petulant baby. In 1944, British and American troops went into battle as firm allies against a common enemy while in 2019 Trump chafes against NATO and gets into a Twitter battle with the mayor of London. As the world marks the 75th anniversary of the D-Day landings, how healthy is the Anglo-American alliance that made them possible?

The US president certainly does not sit easily with war heroes. During his extraordinary spat with the late Senator John McCain, a Vietnam War veteran who was captured and tortured by the North Vietnamese, Trump commented sarcastically that he preferred his war heroes not to get captured.

Perhaps he did not realise that that would have excluded Winston Churchill – a man even more revered for his wartime role by Americans than he is in the UK. He was captured during the Boer War and became a national hero when he escaped from his PoW camp. It’s a sobering thought as Trump travels to France for the D-Day ceremony.

The D-Day landings have developed something of a mythology of their own, as a moment of heroic Anglo-American endeavour, sealing the wartime alliance and forging a transatlantic partnership that would see the world safely through the World War II and the Cold War that followed.

The truth is more complex. The fighting on the day was much harder than many people realised, at least until the appearance in 1998 of the Stephen Spielberg movie Saving Private Ryan, with its graphic portrayal of the fighting on Omaha beach. The fighting in the Normandy countryside in the days after D-Day similarly proved much harder and costlier than anything the allied commanders had anticipated. Recent research suggests that even the training for D-Day actually caused more casualties than the invasion itself.

Moreover, the Allied High Command was far from the ideal of Anglo-American brotherhood the popular mythology would have us believe. The British commander, Field Marshal Viscount Bernard Montgomery, took little trouble to conceal his contempt for the American commanders, General George S Patton and especially General Dwight D Eisenhower, the Allied Supreme Commander, to whom “Monty” showed unforgivable insubordination.

Nor was the Anglo-American political relationship as harmonious as is often supposed. Churchill and Roosevelt certainly had a good relationship and a shared loathing of Nazism – but Roosevelt was deeply suspicious of Churchill’s moves to maintain the British Empire after the war and by 1945 he was drawing away from Churchill and towards Stalin. His successor as president, Harry Truman, put a stop to that move but never enjoyed the warm relationship with Britain that Roosevelt had nurtured.

Nevertheless, in the years after 1945 a “special relationship” did develop between Britain and the United States – even if the term was always more important in London than it ever was in Washington. Faced with the imposing might of the Soviet Union, the Western allies drew closer together after 1945, sharing the occupation of Germany and Austria and forming a series of alliances. The best known of these was – and is – NATO, which was formed in order to “contain” Soviet Communism, which each saw as a threat to western values that could spread in much the same way as a virus.

To this end, Britain tied its defence policy closely to the United States, depending not only on the deployment of American military weaponry and personnel, but even on American nuclear weaponry for Britain’s supposedly independent nuclear capability. In fact, Britain cannot use its nuclear weapons without the go-ahead from Washington, so if there is a special relationship, it is certainly not one of equals.

Nevertheless, the 75th anniversary of D-Day therefore provides a moment when the political realities of today can be put aside (Theresa May must be delighted to have a day without Brexit). Thoughts can instead turn nostalgically to the events of 1944, when there was at least the appearance of parity between the two allies. 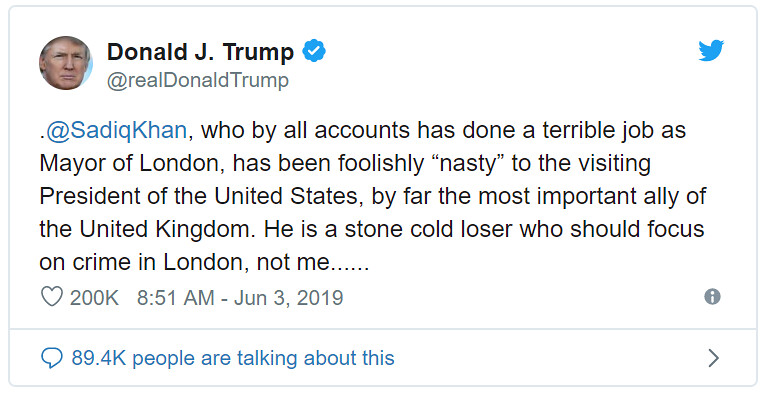 It is tempting to contrast Trump’s boorish behaviour and his petulant tweet-spat with Sadiq Khan with the urbane charm and tactful diplomacy shown by Eisenhower, the Allied Supreme Commander and himself a future Republican president. He managed to keep Patton and Montgomery from each other’s throats while also maintaining good relations with Churchill, the king, the British public and his own president – a delicate balancing act.

More worrying, perhaps, is the contrast between Eisenhower’s commitment to the wartime alliance – even if it meant giving precedence to Montgomery’s ultimately unsuccessful Operation Market Garden (the “Bridge Too Far” campaign at Arnhem in the Netherlands) over Patton’s proposal for an American-led drive directly into Germany.

Eisenhower was no sentimentalist about his allies: anglophile though he was, in 1956 he took decisive action against sterling to put a halt to Anthony Eden’s Suez invasion. But if allies sometimes needed to be reined in, Eisenhower also knew how to work with them in order to hold firm against a common enemy.

By contrast, Trump has shown impatience with his allies and enthusiasm for his opponents. Even leaving aside the claims of Russian interference with his election in 2016, Trump has given every sign of getting on better with the Russian president, Vladimir Putin, than he does with European leaders.

He has denounced his NATO allies for not committing to the alliance enough and welcomed Britain’s exit from the European Union. The contrast with Roosevelt, Truman and Eisenhower – all of whom knew how to maintain American interests while still working with allies – could hardly be more stark.

So what lessons could Trump learn from D-Day? He will certainly learn its value in terms of news coverage – showing himself and his family in suitably dignified poses – but the main message will probably pass him by. D-Day’s success arose from international cooperation among allies – and its setbacks and failures arose when that cooperation weakened.

The Global Financial Safety Net: Lessons for the COVID-19 Crisis