Panic on the Streets of Hamburg - The German Right to Protest 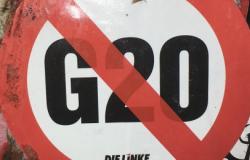 International Media Centre – G20 Hamburg Summit. In 1949 the German Constitution was approved by the Western Allies of the Second World War. Recognised internationally as one of the greatest protectors of human rights and dignity, it contains extensive legislation to ensure that democratic legitimacy is always upheld. Created to ensure that potential dictators would never again gain power and to prevent past atrocities from being repeated, one of its key pillars is the right to protest. Article 8, stating that “all Germans shall have the right to assemble peacefully and unharmed without prior notification or permission”, is binding on all state authorities and restricts the imbalance of power between government and the people.

The “mood” surrounding Hamburg during this year’s G20 has embraced this pillar. While many protesters are angered by the presence of leaders like Trump, Putin and Erdoğan, others view the summit as a meeting of a “globalist elite” only interested in perpetuating their capitalist agenda rather than helping those left behind by globalisation. Given this mix of feelings it is not surprising that thousands have gathered in Hamburg to vocally demonstrate against the summit.

However, what is striking is the number of protests that have been organised in advance and registered with the authorities, 30 so far. Indeed, demonstrations have been taking place since the Monday preceding the summit and are set to continue throughout the week with five different demonstrations planned for Thursday, the day the leaders arrive, and eight for Friday, the official start of the summit.

On Monday thousands of civilians occupied pavements and street corners of St. Pauli, an area within walking distance of the summit secure zone. On Wednesday, as part of an event organised by the German activist group Gestalte, 1,000 volunteers dressed in grey clothes mimicking zombies and walked in silence around the city before stopping to reveal colourful clothes beneath. While remaining peaceful, they wanted to show, they said, that  “no change can start from some political elite” but it can from every single individual.

However, Ralf Martin Meyer, Hamburg police chief, remains concerned that the events will turn out to be “not just sit-in protests but massive assaults”, reminding those present of the scale of the security presence throughout Hamburg. Nonetheless, even in the face of this security dilemma the German authorities remain clear that it is important to uphold the key pillars of the constitution by allowing civilians to demonstrate.

Hamburg itself has a vibrant history of social action and protest. The Sternschanze district, where the summit is taking place, is a hub of far-left and alternative political views, partially due to a thriving student population. Furthermore, the Rote Flora, a building in this area occupied in protest regularly since the 1980s, hosts alternative political and cultural events. This virile community context cannot have been ignored in selecting Hamburg as 2017’s host city. Indeed it seems the intention may have been to host the summit in an area that would spark resistance, framing Germany as a tolerant nation to the world, whilst continuing to encourage healthy democratic process and the constitutional right to protest.

This starkly contrasts the 2015’s Turkish G20 presidency, with President  Erdoğan accused of a series of human rights abuses, particularly since an uprising in 2013 after which time Turkey saw an increase in police presence, censorship of the media and internet, and the incarceration of unfavourable journalists. This comparison was only compounded earlier this year when a group of non-violent protestors in Washington DC were beaten by members of  Erdoğan’s security team during a protest outside the Turkish consulate. The German government have now advised  Erdoğan that his security team are not welcome in Hamburg; crowd control would be handled by local police alone.

The contrast between the two hosts has been highlighted again only a day before the beginning of the summit by reports of human rights activists being detained by the Turkish administration.

It remains to be seen whether Germany’s statement of national tolerance, human rights and democracy will be completely upheld over the summit and ensuing protest. While German security services intend to deal with all potential incidences of violence on their own terms to avoid further conflict and maltreatment of protesters, early indicators suggest the situation may escalate rapidly. An “enormous” seizure of weapons, such as knives and baseball bats, and flammable liquids, has already been reported, as well as the use of water cannons on small groups of protesters.

Moreover, last March, the Hamburg State Office of Criminal Investigation released a report revealing that 4,000 left-wing extremists were expected to attend demonstrations. A week ago this number was raised up to 8,000 by Hamburg's Domestic Affairs Office. Many are expected to take part in the “Welcome to Hell” march, organised by the alt left party, in which activists from other European countries, like Italy and Switzerland, are expected to join. In the face of this level of protest it is unclear whether the 15,000 police officers that will be on duty during the summit will be as tolerant as the German authorities have claimed they will be, and whether the strong dissenting message of protesters will get lost amid the chaos.