A Post-Coronial World: A Decolonised Future for Global Development 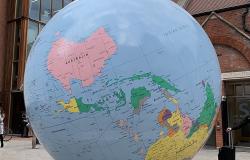 As COVID19 rages across the world, it is renting asunder the global order. With the US in self-isolation, Europe on its knees and China discredited, the war on the virus is being successfully waged by new actors, making the established western powers and the rising Chinese power irrelevant to the global order. Countries are innovating models of development and global solidarity that promise to decolonise international development for good.

International development as a global hierarchy

The world turned upside down: Shattering the global hierarchy

COVID19 promises to end Western dominance of international development. Despite its own complicity in the diffusion of the pandemic, China has quickly emerged as a donor to embattled nations in Europe including Italy, France, Greece, the Czech Republic and Serbia. Chinese philanthropist Jack Ma donated much-needed equipment to countries in Africa and Europe, and the  USA. Ma’s recent announcement on twitter donating 100 million masks to the World Health Organisation stands in stark contrast to US President Donald Trump threatening to end US contributions from that body. Of course, such assistance has not meant that recipient countries have overnight turned pro-China, neither in Europe nor elsewhere. But it has exposed the West’s ability to support the community of nations that buttressed the global order. Most important, Chinese aid has upended our conventional assumption that development assistance flows only in one direction: from the west to the rest.

Chinese global assistance is hardly exceptional. Cuba’s shipments to Italy, Spain and elsewhere is another excellent example of development assistance from countries labelled as “developing” to those styled as “developed”. A team of doctors was deputed from Somalia to assist former colonial power Italy in the battle against COVID19 early in April. Last week, Egypt sent a team to support the USA’s efforts, while shipments of medical supplies arrived from Turkey and Myanmar to meet urgent demand for medical supplies in Britain. India donated massive consignments of life-saving medical supplies to Kazakhstan, Nepal, Seychelles and Afghanistan and made commercial exports to Indonesia, Brazil, Spain and the US among others. Indeed, as an edgy world grows increasingly suspicious of Chinese actions, and the US retreats into self-isolation, the threat that China might step into the shoes of the West appears to have retreated.

Decolonising development in times of COVID19

New models of development beyond the West and China are becoming prominent. Taiwan’s vigorous and arguably successful response to the eruption of COVID19 has earned it well-deserved, and long overdue, respect in Europe. Its “mask diplomacy” has done much to boost the island’s soft power across the world including in countries wealthier than itself. South Korea’s mass testing and tracing initiatives, which lie at the heart of its low rates of infection and death, are the stuff of legend. Building the lessons learnt from SARS, South Korea’s approach has much to offer the world,  including the West if these countries would only be willing to unshackle themselves from imperialist arrogance.

Many parts of the so-called “developing world” have increasingly shown that they do not need saving by either the West or by China. Universities in Zimbabwe are manufacturing gloves, masks and hand sanitisers.  A factory in Kenya turned into a surgical mask assembly line overnight, producing as many as 30,000 masks per day to meet national demand. Nigeria learnt important lessons in preparation, transparency and testing from its experience of combating Ebola, lessons the US could have done well to learn from.  Likewise, South Africa’s experience with HIV has helped it drastically reduce cases. The Indian State of Kerala has similarly tested and traced cases supplementing these initiatives with social provisioning that includes cooked meals for COVID19 patients delivered at their doorstep. The northern town of Bhilwara, labelled India’s Italy when a COVID19 case was first discovered developed a home quarantine model which broke the chain within days.

The pandemic has revealed the vulnerability of the West in protecting its own populations against the onslaught of COVID19. It has also unmasked China’s doublespeak and dented that country’s credibility perhaps beyond repair. Most important, it has showed that developing countries need neither the West nor China in their national battles against a global pandemic.

Dr. Indrajit Roy teaches global development politics at the University of York. His work illustrates the profound ways in which the agency of hitherto marginalised actors disrupt prevailing understandings of development. As Principle Investigator of an ESRC/ EqUIP-funded project titled ‘Citizenship futures’, he unsettles the North-South binary in international development by convening collaborative and comparative ethnographies among socially excluded people in Mumbai, London and Paris. Previous research funded by the ESRC Future Research Leaders (FRL) Fellowship allowed him to direct attention to poor people’s political subjectivities through ethnographic and historical-institutional exploration of such themes as ‘hope’, ‘dignity’ and ‘citizenship’. His latest research on the state-society complexes that underpin the so-called “Rising Powers” and other emerging market economies reflects on the changing role of Global South actors in global development.

Dr Roy published Politics of the poor: Negotiating democracy in contemporary India with Cambridge University Press in 2018 and has previously published in World Development, Journal of Peasant Studies and Journal of Contemporary Asia.