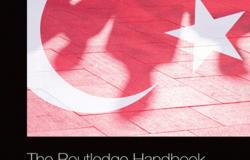 As the only Muslim and secular democratic country in the Middle East, the history, political structure and institutions of Turkey have been of particular scholarly interest. It has been a critical actor in the Middle East as well as negotiating its accession to the European Union. Some scholars use the term “Turkish exceptionalism” referring to the country's unique situation of being a bridge between East and West, while others see this exceptionalism as a myth.

The Routledge Handbook of Turkish Politics edited by Alpaslan Özerdem and Matthew Whiting is an invaluable resource with in-depth discussion of several issues such as secularism, democracy, Turkish nationalism, foreign policy, political economy, the Kurdish question, religious minorities, human rights, and the women’s movement. The book also presents eye-opening analysis of the institutional and structural characteristics of Turkish politics in a wide range of areas, such as elections and party systems, civil-military relationship, NGOs, and media freedom

The volume includes contributions from leading scholars on different aspects of Turkey, and maps Turkish politics from a variety of dimensions in six parts, with the following titles: Part I, history and the making of contemporary Turkey; Part II, politics and institutions; Part III, the economy, environment and development; Part IV, the Kurdish insurgency and security; Part V, state, society and rights; and Part VI, external relations.

The introduction presents an overview of the key concepts discussed in the subsequent chapters. It examines secularism in Turkey, and how the Justice and Development Party has been seen to challenge the founding concept of the Turkish Republic, as well as how the varying forms of Turkish nationalism shape social and political processes. In the chapter (in Part I) titled “Turkish Politics: Structures and Dynamics”, Samim Akgönül and Baskın Oran analyse Turkish politics in three different periods. The authors emphasise that even if the regime is technically a democratic republic, identity-driven problems create a fear-based political environment.

İlter Turan in the chapter entitled “Turkey’s Never-ending Search for Democracy” argues that, since the transition to multi-party politics, important economic and social developments which led to democratisation have been realised; however, recently the Justice and Development Party government has opted for electoral authoritarianism with uncertain outcomes for liberal democracy. An important point that is underlined in the chapter is the clash between state-led ideas of modernisation and the traditional political approach that favours the supremacy of the majority. According to the author, this clash has led to the erosion of civil liberties.

In a chapter addressing Turkish secularism, Murat Somer argues that secularism in the Turkish context must be evaluated based on the varying meanings of the concept such as laiklik (Turkish word for secularism), secularisation, and secularity, and then must be explained by making comparison to their western and non-western counterparts. Somer notes that there is a massive body of descriptive, interpretive, causal, and critical writing on laiklik. For the author, in the Turkish context, political secularism has been valued and understood primarily as an instrument for development, modernisation and catching up with the Western world.

In Part II, Ersin Kalaycıoğlu’s chapter analyses Turkish electoral and party systems from a historical perspective, noting that Turkey has adopted both majoritarian and proportional representation electoral systems. The chapter addressing civil-military relations in Turkey authored by Metin Heper concludes that in the first decade of the twenty-first century, the military elites began to doubt the wisdom of their interventions in political sphere. As noted by Heper, especially after the official EU candidacy in 1999, a considerable degree of democratization was witnessed in civil-military relations. Within the framework of EU harmonization packages, the political autonomy of Turkish Armed Forces has been diminished to an important degree.

The fourth section of the book is dedicated to the Kurdish Question. Matthew Whiting and Zeynep N. Kaya in their chapter trace the origins of the Kurdish question back to Ottoman times. The authors examine the historical background of the issue with analysis of the failed peace process and the 2016 failed coup attempt. They discuss how the Kurdish question emerged, and how it evolved under the Turkish Republic up until the present day. Whiting and Kaya develop their ideas further in a recently published article in Democratization.

The chapters in Part V discuss human rights in Turkey, the women’s movement, religious minorities, religious education, and healthcare, while Part VI provides comprehensive coverage of foreign policy issues – such as Turkey’s relations with its Middle East neighbours, and its relations with the US, Russia, the EU, Cyprus, and the UN.

In the concluding chapter, Özerdem and Whiting stress the continuation of a highly sensitive debate over secularism in Turkey in addition to discussing the role of religion in policy making. They also discuss the press freedom record that has gradually worsened under Justice and Development Party rule.

Since its establishment in 1923, there has been rapid change in the cultural, structural, socio-economic, legal and constitutional dimensions of the Turkish Republic. Fundamental change and transformation have occurred in institutions, society, and politico-economic structure. More transformative changes took place in Turkey since the failed coup attempt in 2016 and the transition to the current presidential regime in 2018. This book is a valuable resource because it covers these recent changes and transformative shifts, in addition to addressing the historical background and sui generis political culture and institutions of Turkey.

Dr. Begüm Burak received her PhD degree in 2015 from Fatih University. The areas of her academic interest include Turkish politics, civil-military relations, secularism, critical discourse analysis, and media-politics relations. In 2013 and 2014, she participated in the Erasmus Teaching Mobility Programme in the UK, Italy and Spain. She is currently an associate researcher in the French Institute of Anatolian Studies. Details of her research can be found here.