Self-Determination in Québec: will old sparks reignite as the eyes of the world fall on Charlevoix? 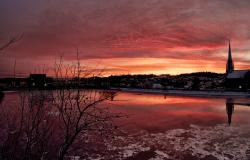 International Media Centre – G7 Charlevoix Summit. Brexit, the closely-fought Scottish independence referendum, ongoing turmoil in Cataolonia, and, more recently, Italy’s election casting concerns over its membership within the EU, represent an ongoing resurgence of (sub-)national pride spreading throughout Europe. Given this, the long-standing sentiment among a large proportion of Québec’s population for independence from Canada (or at least much greater autonomy) is likely to set a fragmentary undertone at the upcoming 44th G7 Summit in Charlevoix.

Québec’s desire to secede is historically rooted in its ethno-cultural tensions with its parent state. This can be traced back to the Seven Years War (1756-1763), and the socio-economic “Quiet Revolution” of the 1960s. In a contemporary sense, these divisions can be seen in the fact that 78% of the Québec population count French as their first language and 83% identify as Catholic, standing in contrast to much of the rest of Canada where English language and Protestantism is dominant.

In April this year, more than 20 years since the last referendum on the matter, the issue of whether Québec had a right to unilaterally secede from Canada was once again in the Québec Superior Court. The Court upheld its decision that Bill 99 – “An Act respecting the exercise of the fundamental rights and prerogatives of the Québec people and the Québec State” - was constitutional under Canadian law.

The Bill, which expressly states “the right of the Québec people to self-determination”, was adopted by the Parti Québécois government in 2000 and is widely seen as a sovereigntist response to the Clarity Act, passed by the Parliament of Canada in 1999.

The Clarity Act, which has been strongly supported by Justin Trudeau, gives the Parliament of Canada the right to decide whether a referendum question is clear and whether the result represents a majority of the population. The Act emerged from the 1995 referendum, in which the people of Québec narrowly voted against sovereignty with 50.58%.

In many ways both the Clarity Act and the recent decision on Bill 99 highlight the problem of territorial integrity in modern secessionist movements.

Indeed, the Québec Superior Court’s recent decision is congruent with the legal history of the secession of Québec. On 20 August 1998 the Supreme Court of Canada produced an advisory opinion, the Québec Secession Reference, on whether the province of Québec possessed a right to secede unilaterally from the rest of Canada. It found that it was not permissible either under Canadian or international law.

Québec easily fulfils the international customary criteria for independent legal statehood. In accordance with the 1933 Montevideo Convention it has: a population of approximately 8.4 million; a territory of nearly 600,000 square miles, and; an effective governance structure, as established by the 1867 Constitution Act. Similarly, Bill 99’s outlining of “the right of the Québec people to self-determination”, is also reflected in the UN Charter.

However, with the end of state-creation emerging out of the decolonisation period prominent in the mid-Twentieth Century (i.e. independence of those states that were hitherto subjugated as a violation of jus cogens norms), the principle to self-determination evolved, shifting away from notions of secession. In its recent application outside of the colonial framework – evident in the cases of Kosovo, Somaliland and Abkhazia – self-determination has become an issue of human rights within an established territory, rather than an issue of territorial integrity itself; precluding secession as a legally viable option.

Despite being widely regarded as legally implausible, it will be interesting to note how the issue of Quebec’s independence manifests itself at this year’s G7. To be sure, support for independence has recently been waning, and the Parti Québécois has ruled out another referendum if it wins the next election. However, given the current political upheavals experienced by Canada’s European counterparts, recent political point-scoring on Québec coming from Trudeau’s rivals, and expected protests at the Summit (exacerbated by this year’s positioning of the ‘Free Expression Area’), this may not stop historical tensions emerging as the global spotlight shines brightly upon Charlevoix.