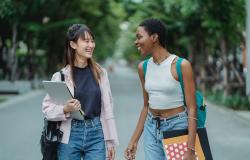 In qualitative research building a rapport and friendships with participants is often presented as a means to gain access and data from research participants. However, as Helen Kara discusses, using friendship in an instrumental way presents serious ethical issues for researchers.

Trainee qualitative researchers, learning the most popular research method of interviewing, are routinely taught to use their interpersonal skills to create rapport with participants. This has been questioned for the last 20 years by Jean Duncombe and Julie Jessop. They ask, how ethical it is for researchers to fake friendship as a means to the end of gathering data?

On the one hand, it is common for people to use interpersonal skills to help us get what we want from others in our day-to-day lives. This applies whether we want a loan from a credit agency, a prescription from the doctor, a response to a complaint – in a multitude of situations, presenting our most polite and friendly selves can help to get the results we want. So it is arguable that it makes sense also to use these everyday methods in research.

On the other hand, research encounters are rather different from everyday encounters. This applies particularly to qualitative research where a researcher may spend a considerable period of time giving a participant their undivided attention. This is an unusual and often a welcome experience for participants, who often describe it in positive terms such as ‘therapeutic’, ‘cathartic’ or ‘a treat’.

Many of the people we want things from in day-to-day life are either providing us with goods and services, so that a transactional element is built into the encounter, or are already in a personal relationship with us through kinship, friendship or community membership. So the rapport we build in those situations already has a clear basis which is mutually understood. This does not apply within the research encounter, where we are usually asking participants to give us their time and information in exchange for a potential benefit to an imagined future population. (I considered the extent to which this is ethical in another post earlier this year.) Also, despite all the efforts to secure informed consent, we know that people generally agree to participate in research for their own reasons rather than ours. And, where that reason is to get a little human company and kindness, which is lacking from their own lives, the practice of building rapport begins to appear even more suspect.

Imagine you are, let us say, living on minimal welfare benefits with a chronic condition that makes it difficult for you to leave the house. You have lost touch with the friends you used to have when you could go out to work, and your family live far away. You suffer from anxiety and you are very lonely. The carers who come in three times a day are brisk and professional; they don’t have time to chat, and you don’t want to hold them up because you know they are always under pressure. Then a researcher calls, saying she is doing an evaluation of the care you receive, and asking if she can visit you to ask a few questions. You are delighted because it’s been years since you had a visitor and she sounds so kind and friendly on the phone. When she visits, you tell her all sorts of things about yourself and your life. She seems really interested, and laughs at your jokes, and tells you a few things about her own life in return. You haven’t felt this good in years. When she has asked all her questions, you ask one of your own: please will she visit you again? She looks at the floor and says she would like to, but she can’t promise, because between work and her children she doesn’t have much free time. You would like to suggest she brings her children with her, but you know a ‘no’ when you hear one, so you let her go, wait for the front door to close, and listen to the emptiness of your home and your life.

Duncombe and Jessop point out that these problems are multiplied in longitudinal research, where the boundaries between real and faked friendship can become much more blurred. They share experiences of participants beginning to treat them as friends, and the discomfort that arises when they don’t reciprocate. I have had similar experiences, and I’m sure many other qualitative and mixed-methods researchers have too. It is interesting to consider this Euro-Western approach in the light of the very different Indigenous approach, in which research is deemed to be ethical when it serves to maintain and develop existing relationships. Looked at in this way, our Euro-Western approach of creating and then dropping relationships to further our research purposes seems potentially abusive.

The EU-funded TRUST project developed a Global Code of Conduct for Research in Resource-Poor Settings. It was based on four values elicited from research they did with a wide variety of people around the world: respect, fairness, honesty and care. The aim was to combat ‘ethics dumping’, where research deemed unethical in a higher-income country is conducted, instead, in a lower-income country where research is not governed by a regulatory system. I would argue that these values should also apply where research is done by a researcher with more social capital than some or all of their participants. In the vignette above, the researcher was not entirely honest and did not show care in response to the participant’s request, e.g. by signposting them to a local befriending service. This could be described as ‘friendship dumping’.

When you think about it, researchers using their interpersonal skills to create rapport with a participant as a means to an end is actually quite manipulative. This might be more defensible when we are ‘studying sideways’ or ‘studying up’, but even then it seems questionable. Showing respect for participants would be a more creditable aim, especially if it was combined with fairness, honesty and care.

Dr Helen Kara has been an independent researcher since 1999 and also teaches research methods and ethics. She is not, and never has been, an academic, though she has learned to speak the language. In 2015 Helen was the first fully independent researcher to be conferred as a Fellow of the Academy of Social Sciences. She is also an Honorary Senior Research Fellow at the Cathie Marsh Institute for Social Research, University of Manchester. She has written widely on research methods and ethics, including Research Ethics in the Real World: Euro-Western and Indigenous Perspectives (2018, Policy Press).

This blogpost first appeared on Helen’s blog under the title Rapport or Respect and was reposted from the LSE's Impact blog.