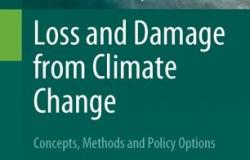 Climate change is one of the biggest challenges of our times. Nothing has belaboured this point as much as the year 2018: identified as the fourth hottest year on record that saw a spate of devastating extreme events around the world.  The year also witnessed the release of the Intergovernmental Panel on Climate Change (IPCC)’s much-awaited report on limiting global temperature rise to 1.5˚C. The findings were sobering – while limiting temperature rise to 1.5˚C is not impossible, it will require unprecedented changes in the way energy, agriculture, urban, and industrial systems operate, with significant cost implications.

Climate change is projected to worsen the condition of the poorest and most vulnerable across the world. After decades of mounting evidence and lobbying by Small Island Developing Nations (SIDS) and Least Developed Countries (LDCs), one of the instruments to deal with this differential vulnerability was the establishment of the “Warsaw International Mechanism for Loss and Damage associated with Climate Change Impacts” in 2013. Hailed as a landmark event in global climate policy, the Warsaw Mechanism emphasised the need to recognise climate-induced tangible and intangible losses and damages, advocating for compensation to those impacted. However, the landscape of Loss and Damage (L&D) is ‘broad, diffuse and somewhat confusing, while concepts, methods and tools, as well as directions for policy remain vague and contested’ (p.5). In this context, Loss and Damage from Climate Change: Concepts, Methods and Policy Options, is an important and timely book.

With an impressive list of climate researchers and practitioners as authors, the book is one of the few comprehensive pieces of work on L&D covering developments in science, methods, policy and legal arguments, and empirical cases, as well as pointers for future research and practice. The book’s key contribution can be summed up in five propositions that it makes in its opening chapter. First, comprehensive risk management underpinned by climate justice considerations and linked to existing adaptation interventions, can help align disparate perspectives.  Second, attribution science (the science of attributing events and anomalies to climate change) has made rapid strides and can inform actions to minimise, avert, and address losses and damages. Third, while understanding ‘hard’ adaptation limits is important (e.g. certain adaptation technologies in coastal areas becoming unfeasible as sea levels rise), more work is needed on assessing ‘soft limits’ to adaptation (e.g. how some populations cannot implement certain adaptation options because of pre-existing inequalities). Fourth, climate risk insurance has emerged as a potential preventive strategy with some successful examples, but accountability remains a critical concern. Fifth, L&D negotiations which are often seen as a game of ‘us and them’ need to be reoriented as collective ambition to effectively manage risks, leverage mutual benefits, and institute inclusive climate action. Taken together, these five propositions are an important call to climate change and development researchers, practitioners and policymakers. While these propositions seem broad in their scope, they are situated in real-world examples and events through a wide set of case-based examples from around the world.  In this review, I touch upon some chapters to give the readers a flavour of the book’s depth and breadth.

Drawing on multiple framings of loss and damage, Part 2 of the book captures insights from attribution studies, political and legal discourses, and finally impacts and disaster assessments across six chapters. The chapter on the relevance of attribution for L&D policy and practice (James et al., Chapter 5) is particularly useful in the context of growing climate denial among global political leaders (USA and Brazil being prominent examples). By focussing on furthering an understanding of causal links between geophysical systems and society, the chapter highlights how attribution studies can help course-correct the L&D debate from narratives of responsibility and blame to an evidence-based discussion on climate-attributed losses and damages.

Part 4 of the book ‘Geographic Perspectives and Cases’ crystallises the somewhat abstract narratives of L&D, anchoring concepts such as impacts, adaptation limits, differential vulnerability, and risk management in experiences from SIDS, mountains (Peru, Nepal), and the Arctic. The readers are introduced to lived experiences of climate change in Pacific Islands where countries such as Vanuatu or the Solomon Islands are regularly facing losses to livelihoods, and some locations are already nearing adaptation limits (Heslin, Chapter 16). In Chapter 16, climate-induced relocation and intangible losses such as loss of cultural heritage are discussed using accounts of people from the Marshall Islands living in the United States. Merely 2m above sea level, the islands’ options to adapt are limited to voluntary resettlement or displacement. In such contexts of increasingly intolerable risks and doomsday discourses of climate refugees, the narratives of cultural erosion are particularly poignant. However there is no chapter on L&D in arid and semi-arid lands. Given growing evidence that climate change is driving land degradation and desertification, as well as the vast numbers of people living in drylands, this omission is unfortunate.

It is in Part 5 ‘Policy Options and Other Response Mechanisms for the L&D Discourse’ that the book tackles the messy and highly politicised space of implementing an L&D agenda. The chapters discuss several instruments that have been used (to varying degrees) to operationalise L&D such as developing national policies, fighting climate lawsuits, investing in risk insurance, and leveraging technology to reduce negative impacts. Particularly interesting, with valuable lessons for L&D debates, is the chapter on Germany’s first climate lawsuit where a Peruvian national sued a German energy company for contributing to the outburst of a glacial lagoon (which, it was argued, was fuelled by glacial retreat linked to anthropogenic climate change). By recognising the responsibility of large energy companies in greenhouse gas emissions, the case has made legal history. Importantly, the chapter raises important questions of assigning blame, who is liable, and definitions of what is ‘adequate’ compensation.

Overall, Loss and Damage from Climate Change: Concepts, Methods and Policy Options is an important book of great relevance to those involved in climate policy making and negotiations, and researching topics of climate adaptation, vulnerability and risk, and holds lessons for practitioners and funders working to build the climate resilience of the most vulnerable. It’s findings and five propositions will resonate with wider discussions of climate justice and differential risk, whether climate migration is a viable adaptation strategy, and how to operationalise global climate policy in a highly unequal world.

Chandni Singh is a researcher and faculty member at the Indian Institute for Human Settlements, in Bangalore. Her research is at the interface of climate change adaptation and development with a focus on the Global South.

The Collective Psychology of Coronavirus