‘To Restrict or Not to Restrict’: Protest and Security at the G7 in Quebec 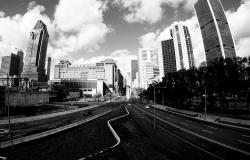 International Media Centre – G7 Charlevoix Summit. Protests have often featured prominently on the sidelines of major conferences. The intensive media coverage and its international reach provide an ideal environment to draw public attention to issues of concern, making them an opportune time for protests. Aggrieved groups therefore leverage on these conditions to make their voices heard. The 2018 G7 Summit taking place in Quebec is no different.

Already, some have planned organised protests for the week of the summit. The Réseau de résistance anti-G7 has planned a protest for the first day of the summit on the basis of the inequality that results from the summit’s outcomes and the operation of the G7 as a whole. Plans have also been made for an Alternative Forum and unitary protests in front of the National Assembly building on day two.

The issue is especially sensitive in Quebec, which has had its share of protests over the years. Fresh in the general psyche are the 2012 student strikes that involved over a quarter of a million participants, and turned violent in multiple instances. Many also fear a reprisal of the 2001 protests that took place during the Third Summit of The Americas held in the city that resulted in several violent exchanges, with riot police utilising tear gas and water cannons against the protestors, dozens of people taken to hospital for various injuries, and a total of 463 arrests. Damages were said to amount to more than $2.5 million. Many residents worry about the damage and disruption that a repeat could cause to their homes and businesses. Understandably, therefore, security and order are concerns for many. 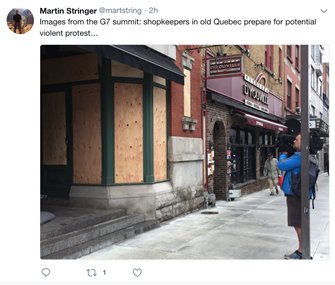 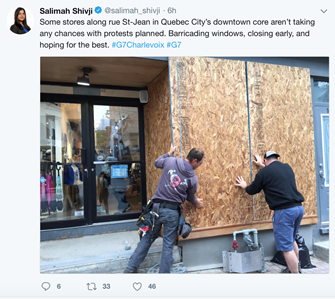 This has resulted in a heightened focus on security, with approximately 70% of the Summit’s $604-million budget, allocated to the sizeable security operation-- a move criticised in the Canadian media. More controversially, the location of the leaders’ meetings and the allocated “free speech area” has raised some eyebrows.

Those leaders will meet in La Malbaie, an isolated venue approximately 150 kilometres away from the centre of Quebec City. The allocated “free speech area” has been designated by the Royal Canadian Mounted Police (RCMP) to be a significant two kilometres away from this primary location, raising questions about the visibility of protests—both in the “free speech area” and Quebec City—during the summit. Among other groups, the Council of Canadians has been very vocal about this limitation, rejecting the “free speech area” due to the limitations it poses on meaningful freedom of expression, quoting the Canadian Civil Liberties Association during the G20 summit in Toronto to opine that:

"Freedom of expression is protected throughout Canada: our country... Protesters cannot be prevented from demonstrating outside of the 'designated demonstration area', particularly when the area set aside is situated in a place that is so remote from the meetings that protesters cannot be directly seen or heard by the leaders…"

Gabriel Dumas, an organiser of the anti-G7 demonstrations asserts provocatively that: “We're facing a state apparatus that is deploying all its tools of repression".

Given this situation, many organisations have chosen instead to shift their protests and demonstrations into Quebec City itself where the summit’s media centre is located.

This is an interesting dynamic that can be compared with the 2017 G20 summit in Hamburg. German Chancellor Angela Merkel intentionally chose the centre of Hamburg to demonstrate that protests should be tolerated in a healthy democracy. It was a high-stakes gamble which proved a win for the principle of democracy (despite the designation of a “Red Zone” around the summit venue where protesters were not allowed), but a questionable result for security and order as protests around the summit quickly descended into chaos and violence.

While it has been widely acknowledged that protests are a critical freedom and instrument of accountability in a healthy democracy, the fragility of the security situation where world leaders gather is also a critical concern. How then should the balance be struck between democracy, and security and order in such sensitive high-stake situations?

On the one hand, by its very nature, a democracy should allow citizens the freedom of expression to engage with democratic processes outside of institutionalised (and sporadic) elements like elections. Intentional moves to contain or distance these expressions can then prove problematic. This is particularly relevant to a group such as the G7 which is invested in ensuring and upholding democratic values.

On the other hand, however, security is paramount in such situations—for leaders, other stakeholders (journalists, for instance), as well as the residents around the summit location.

So, where should the line be drawn between security and the accessibility of democratic leaders to the people? How can we balance the simultaneous operation of both democracy and security? On the eve of the summit, it is still unclear if the perfect balance has been struck. But whatever the result, there will be lessons to learn at future summits.