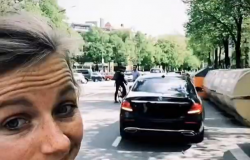 This blog is part of a series on FP2P exploring the lessons from a recent MA course at the LSE taugtht by Duncan Green and Global Policy's Tom Kirk.

Final instalment from my amazing LSE students. Wednesday and Thursday’s posts ran some of their blogs, which were part of their assignment to write an influencing strategy on a topic of their choice. But I gave them the option of doing a video blog (vlog) instead, and several of them grabbed it, with some impressive results. Here are three of the best, from Emma Simons, Leonie Dudda and Akram Al-Mahyni

Leonie Dudda took on the need for better bike lanes and safety in her home town of Munich:

Emma Simons came up with a humorous #NoButts campaign to stop people chucking their cigarette ends on the street:

Akram Al-Mahyni took on an altogether darker topic – the current assault on the rebel enclave of Idleb in Syria:

I asked them to explain how how they made the vlogs:

Leonie: The vlog is in form of an Instagram story. This is a mobile phone app where people upload short videos/pictures. Usually, the viewer can click to the next element. It also gives the possibility to use interactive tools such as polls or comments. Since I don’t expect you to download the app, I recorded the story, so you can watch it as a video.

For the Instagram-Story you will primarily need your phone and the Instagram App. For a few days, I took videos and pictures using my phone whenever thinking I could use it for the story. (I had a rough idea of a storyline and what I would like to include beforehand.) I then created the actual story which is fairly easy and intuitive using the Instagram App. I have never created a VLOG or used the App before, so you can definitely do it. Note that Instagram allows only 15 seconds per snap. In order to be able to send it without the viewer having to download the App, I video-recorded my phone display (Apple iPhone) when displaying the story on it. I then sent the recorded video to my laptop using AirDrop. Finally, I uploaded the final VLOG on Vimeo (with the option of using a password-protection). Have fun!

Emma: I harbour a long-standing aversion to hearing my own voice on recordings or film, so the choice to make a vlog might seem a little counterintuitive. I am, however, adept at creating inane little stories on Instagram and thought this might be a good opportunity to mobilise a well-placed emoji. In the context, aiming to change attitudes and acceptance of cigarette litter in the UK, Instagram also seemed like a prolific and strategic choice of platform. I converted the story to a video for upload to Vimeo. However, in its original format the Instagram story would have been interactive, allowing the viewer/user to click on tagged profiles of stakeholders to understand more about those involved, as well as to post reactions and get involved with the campaign.

While writing about the advocacy issue, I knew the best way to communicate it was visually, showing what happened to neighbouring Eastern Ghouta and contrasting it with the current situation in Idleb. I have worked with civil society colleagues in Ghouta, so I asked Firsa, a person from that community, to talk about it. He was very helpful…too helpful maybe, as we ended up talking for an hour and a half and I had 90 mins of audio material to trim down to fit a 4 minute vlog. That part took the most time. I had to split the recording into different segments based on topics, then listen to them all several times to pick which pieces I wanted, and then further cut them down by trimming out all breathing sounds, long pauses, or even the mid-sentences “uhm”, “err”, “ah” etc…

For the visual representation of the ghost town that Ghouta has become, I went online and looked for the Russian military drone full HD footage that was taken after their “victory” there (all available on YouTube). Ironically those were used by official state TV to celebrate and create a narrative of how the rebels destroyed the area they had “occupied”. Finally, for the background audio, I used a Russian RT TV soundtrack that was used during one of their dramatic drone footage and chose to cut it off suddenly to create a “snap” or shock effect at the end.

Finally, the whole process of audio montage, trimming and mixing videos and music took a solid 14hrs non-stop of work on the eve of the project’s submission date (best way to do a task is to do it last minute under pressure; right?).

Great stuff. Here’s a random 2.5m intro to vlogging I found on the interwebs. What else would people recommend?

And for a truly depressing contrast, here’s my most recent vlog (from Bolivia) – I really need to up my game…….

This first appeared on FP2P.