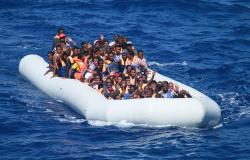 “The International Organization for Migration (IOM) and UNHCR, the UN Refugee Agency, are calling for the immediate disembarkation of more than 400 rescued migrants and refugees currently on board three vessels in the Central Mediterranean […]. The humanitarian imperative of saving lives should not be penalized or stigmatized, especially in the absence of dedicated State-led efforts. The lack of agreement on a regional disembarkation mechanism, long called for by IOM and UNHCR, is not an excuse to deny vulnerable people a port of safety and the assistance they need, as required under international law […]. IOM and UNHCR are deeply concerned about the continued absence of dedicated EU-led search and rescue capacity in the Central Mediterranean.”

The initiatives Mediterranea, Salvamento Maritimo Humanitario and Sea-Eye, rescuing at sea migrants, joined Agora Europe* and its partners to shed light on the situation of persons in exile in the occasion of an event held in Hendaye, on August 29th, promoted by Agora Europe, in partnership with the Columbia University Committee on Forced Migration and Alliance Program, Studio Europa Maastricht, the Maritime Club of Hendaye Txingudi and Les Sauveteurs en Mer SNSM. The event, “Est-ce que l’eau est une frontière?” (“Is Water a Border”) was also an opportunity to highlight the departure of the new missions of Mare Jonio, also on August 29th, and Sea-Watch 4, as both ships were changing course to provide assistance to the Louise Michel after several emergency calls for help were ignored. It was also the occasion to remind that the boat Aita Mari is still blocked at Pasai Donibane port because of administrative constraints imposed by the Italian government.

Such initiatives are more than ever needed, since the governments of the “Fortress Europe”, among others, still perceives migrations as a threat. On the opposite, Agora Europe is convinced that migrations are an opportunity, in particular for the Euro-Med region. Freedom of movement is one of the European public goods promoted by Charta 2020. It constitutes part of a global right to mobility, which is a clear translation into practice of human dignity.

A community of nations and citizens never exists in history without a certain respect of itself, of which treating the foreigner and the refugee as a friend forms part. And yet, migration is too often reduced to a question of national security. Indeed, in response to the so-called refugee crisis, Europe produced the idea of a direct association between securing the existence of and closing borders, such that the relationship with the ‘others’ happens on the basis of fear and criminalization. Fear, far from being reduced, remains central on the emotional level, even while we witness a constant effort to reduce it on a, so to speak, physical level, that is to say, by building walls and turning back boats.

The Aquarius affair, and more broadly the criminalization of sea rescue, made clear that the European political space understands itself to be able to permit unrestricted freedom of movement within its internal borders—the Schengen area—only by denying movement across its external borders. Borders and, more precisely, the process of the externalization of EU borders, poses normative and political question to the determination of an integrated political space. The fact that refugee camps are becoming increasingly established on the borders of the European area—or even outside—is a concrete manifestation of the way Europe, by means of an externalization of its borders, has reshaped its imaginary geography.

At least since the 1990s the question of borders and their often-lethal operations against people in transit is at the centre of critical debates and activism in many parts of the world. In Europe, as well as for instance in Australia, the maritime border has become more and more prominent over the years. This is of course due to dramatic accidents and shipwrecks (for instance, the collision between the Katër I Radës, carrying migrants from Albania, and a ship of the Italian Navy in 1997, and the shipwreck of October 3, 2013 off the coast of Lampedusa), and more generally to the intolerable number of men, women, and children that lost their lives over the last decades in the attempt to cross the European maritime border.

As a notion and an institution, the border has an intimate link with the land at least since the ancient representation of a furrow traced in the earth through a plough. In modern Europe, the steady emergence of the new cartographic notion of a linear border was strictly associated with the formation of territorial states. While the European space was reorganized around that notion, the sea—as well as the colonial world—was subjected to different and shifting legal and political formations. The liquidity of the sea seems even today to resist the geometric accuracy of bordering, as the often-elusive intertwining of territorial waters, contiguous zones, exclusive economic zones, SAR zones, and international waters amply demonstrates. This makes the stakes of sea rescue even higher today.

In a time of pandemic, when crucially important decisions need to be taken in the fields of economic and social policies, the question of migration continues to be strategic both regarding the development of European citizenship and society and regarding Europe’s relations with its multiple outsides. In fact, we must address here citizenship. It is up to us, citizens of our regions and of our countries, European citizens, global citizens, to lead our States and our co citizens in this direction, proving that we can imagine another use of seas and borders, that this is possible and urgent. At the end of the day, these are the stakes sea rescue is confronted with in the Mediterranean.

The migrations’ causes and routes are diverse. They reflect the choice of individuals to leave a situation which constitutes a denial of their human dignity. Refugees are fleeing Syria because of the civil war, the lack of job opportunities and the human rights violations, transiting through Turkey and remaining stuck in exile in Lebanon, as well as in other neighbouring or transit countries. They are walking in the mountains, crossing borders at night, taking boats, risking their lives, looking for safe places where to live, in which their humanity is recognized as such.

The agreement with Turkey and the disembarkation of boats back at Libyan coasts pushes the edges out of the European space itself. Due to the dangerousness of the passage through Libya and following the closure of Italian ports—given the attempt to ‘import’ the Australian model of offshore processing and detention policies (Operation Sovereign Borders, known as the ‘Stop the Boats’ policy) to the EU, in particular in the case of Italy, and more specifically in recent responses of the Italian government to the refugee crisis and the control over external borders (Decreto Sicurezza Bis)—the Western route became the most frequently used route into Europe. Additionally, the Atlantic route to Europe, i.e. the perilous passage from West Africa to the Canary Islands that was once a major route for migrants, is being used more and more. It is the most dangerous. In this respect, it is paramount to addressing the difficulty of where to locate state borders in the liquid space of the Euro-Med region and the Atlantic, where borders dissolve and leave us with the subsequent problem of the indeterminacy of responsibility.

The current COVID-19 crisis makes it even more urgent for the EU to address current and future migration challenges. This Joint Statement on Sea Rescue is an attempt to open a path of solidarity and cooperation. This could not prescind from endorsing a more holistic approach, one that takes into account the perspective of countries of origin and transit, that is, Europe’s “other side” and outsides. Nor can it prescind from defining a more comprehensive method covering internal and external borders, as well as the Atlantic, Central, Eastern and Western Mediterranean migratory routes, and including a comparative analysis of migration policies.

Such is the purpose of this Joint Statement on Sea Rescue, aimed at reinforcing the universal principle of non-refoulement, in the conviction that the protection of lives at sea shall endure in our societies both among the current priorities of European action and as long-standing transnational common values, that forced disappearances shall be visible and avoidable, and deaths avoidable and accountable.

Agora Europe aims to inaugurate and promote a transnational debate—reaching across Europe and beyond—on the scale, scope, and substance of the European political space. The purpose of this debate is to encourage cooperation, promote inclusion, and develop connections across Euro-Mediterranean and Atlantic regions, questioning the meaning of citizenship and its limits in an age of mass migration and global interconnection. In order to facilitate this debate, Agora Europe functions as a permanent and itinerant agora, bringing together academics, politicians, activists, cultural actors and citizens. Agora Europe has been originally co-founded in 2018 by Etienne Balibar, Caterina Di Fazio, Nadia Urbinati and several other academics and activists, jointly at Paris 1 Panthéon-Sorbonne University and Columbia University. Since 2020, Agora Europe is a non-profit association registered at the Mairie d’Hendaye (Hendaye’s City Hall). It coordinated and presented at the European Parliament, jointly with Studio Europa Maastricht, Charta 2020, the first charter of European public goods.

To endorse the Statement on Sea Rescue, please write to agoraeurope.eu@gmail.com