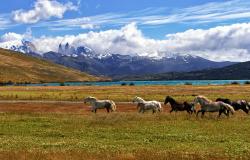 Biodiversity has never been more at risk than it is today. To halt this trend, the global community urgently needs to agree on new goals. Will the 15th Biodiversity Conference finally be able to happen despite Corona?

Biodiversity is declining worldwide faster than ever before in human history. Of an estimated eight million animal and plant species, one million are threatened with extinction, according to the World Biodiversity Council. While the field hamster, polecat and garden dormouse are urging us to act, the polar bear, rhinoceros, mountain gorilla and tiger are calling for an end to the destruction of their habitat on behalf of all endangered plant and animal species.

Like global climate policy, global species conservation policy has suffered greatly from the consequences of the Corona pandemic. The 15th UN Biodiversity Conference, originally scheduled to take place in October 2020 in Kunming, China, has been postponed twice amid the pandemic. The hosts' latest idea is to hold the conference in two parts: from 11 to 15 October as a virtual summit and then with a face-to-face meeting in spring 2022.

At the same time, the 196 signatory states to the UN Convention on Biological Diversity urgently want and need to adopt a new framework agreement for the twenty biodiversity targets that already expired in 2020. According to the latest UN report on biodiversity dating from September 2020, not a single target has been fully achieved. Neither has the rate of loss of natural habitats been reduced to almost zero or at least half, nor has the overfishing of oceans and waters been stopped. We are still far from sustainably managing agriculture, aquaculture and forestry or reducing environmental pollution to harmless levels.

Nevertheless, there are still positive changes to report in a few areas. At least 17 percent of terrestrial and inland water areas and 10 percent of coastal and marine areas should be under effective protection by 2020, and indeed the global community as a whole is close to achieving this goal - but not everywhere and not at the same speed.

With Natura 2000, the European Union has created the largest transboundary coordinated network of protected areas in the world. With currently around 27,000 protected areas covering 18.5 percent of the EU's land area, it makes an important contribution to the protection of biological diversity.

Slovenia as a role model: The home of bears and lynxes

The small nation Slovenia has the largest proportion of protected areas in the EU. The country's more than 350 protected areas cover 10.6 square kilometers of the maritime and 37.6 percent of the terrestrial area. In their country report on Slovenia, the experts at the Bertelsmann Stiftung's Sustainable Governance Indicators (SGI) write: "Considering the Natura 2000 coverage in Slovenia, there is no doubt it forms the backbone of efforts to promote green infrastructure."

Slovenia has a long history of sustainable forest management and is aware of the value of natural habitats for the national economy. Despite its size, it is considered one of the most biodiverse countries in Europe, home to one of Europe’s largest bear populations and responsible for the successful reintroduction of lynx. In keeping with this trend, Slovenia is using its presidency of the European Council to continue to promote the protection of biodiversity internationally.

Chile shows how divided a country can be when it comes to nature conservation. In recent years, it has made considerable progress in the maritime sector. The sea around Easter Island, which was protected in 2018, is an area far from the coast and almost as large as Chile's entire land area, and protects the habitat of 142 endemic and 27 threatened and endangered species, including sea turtles, humpback and blue whales. This area of marine protection was established in close cooperation with the indigenous Rapa Nui people of Easter Island, who were granted exclusive fishing rights in order to feed themselves and continue centuries-old cultural traditions. Ecologically, however, the sea can only regenerate if the ban on commercial fishing is effectively enforced - and this is precisely what is lacking in Chile.

The SGI country experts criticize that Chilean environmental policy is subject to strong domestic pressure from industry and therefore often prefers to let the judiciary have the last word. Here, it is more a case of: "Tangible environmental-policy impacts on the productive sectors tends to take the form of ex post fines (applied once the law has been violated) rather of preventive regulations and compliance. This weakness can be observed, for example, in the fishery industry."

Of the 41 EU and OECD countries surveyed in the SGI study on sustainable long-term policy, as many as 25 have protected or are close to protecting at least 17 percent of their land areas, as required. Chile (10.4 percent) is one of the few countries that have made little progress in terrestrial conservation since 1995 and are not visibly moving towards this goal. Only the USA (9.1 percent), Switzerland (7.6 percent) and Turkey (0.2 percent) fare worse on this indicator.

According to SGI country experts, although the Turkish Ministry of Environment and Urban Development adopts nature conservation targets, "it is not obvious from the ministry’s annual activity report how the ministry has connected these aims with the relevant sectors, including in policymaking, policy implementation and the assessment of outcomes." In order not to jeopardize its economic status, Turkey prefers to continue to count itself as an emerging economy, despite its OECD membership and lofty economic ambitions, justifying why it cannot deliver on international environmental commitments. The recent marine “sea snot” disaster in the Sea of Marmara shows how much damage it is inflicting on itself. According to experts, the sensitive ecosystem has been irreversibly damaged. Sixty percent of its species have already disappeared.

Conservation measures, the World Conservation Organization estimates, have saved between 11 and 25 bird and mammal species from extinction since 2010. Two to four times higher species losses would have occurred since 1993 if land and marine areas had not been protected. Slowly but surely, the realization is dawning around the globe that keeping nature intact is our best ally in the fight against climate change. The expected new framework agreement on the protection of biodiversity can only benefit from this increased awareness.

Karola Klatt is a science journalist and editor of SGI News and the Bertelsmann Stiftung's BTI Blog.

Translated from the German by Jess Smee.