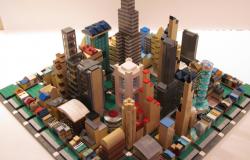 Two days in to World Urban Forum 9 and the topic of smart cities is already prevalent before many of the key sessions regarding the subject have begun. A quick walk around the vast exhibition hall makes it clear that smart city design and advertising is at the forefront of the minds of planners, policy makers and those invested in the built environment. Technology-based solutions are increasingly being viewed as a way to enhance citizens quality of life but what are the underlying motives and is this really the case for all urban citizens?

Since the 1990’s the ‘smart growth’ movement has gathered momentum, rapidly increasing in popularity since 2010. Whilst predominantly technology focused, there is still no conclusive definition of a ‘smart city’. Point 66 in the New Urban Agenda states that it will commit to “adopting a smart city approach” but what does this actually mean and is it really possible to instigate this in cities across the world? World Urban Forum 9 presents an excellent opportunity to address this issue and discuss the best methods of implementation and delivery.

In response to the release of the New Urban Agenda in 2017 there were concerns that ‘smart city’ frameworks will be generic, with little regard to context. The role of the citizen has also been questioned within the ‘smart cities’ paradigm, particularly if progress is driven by numbers and data alone. It has been argued that smart urbanism should begin “not with technology, nor with smart, but with urban knowledge”.

This was echoed during the side event on Multidimensional Sustainability Benchmarking for Smart Cities and Regions. There was a lot of scepticism around the use of technology to measure data in cities. Many of the speakers and participants are concerned about who is being left out of this data collection, particularly the urban poor and those in informal settlements. Whilst cities may be considered smart in being able to collect and measure data in an efficient and interactive manner that can positively affect policies and planning, how effective is it if not all citizens are being included? This was highlighted as an issue that needs to be addressed. But I am critical that if this is not being tackled here at the WUF9, when will it be discussed?

There was a much more positive tone regarding smart cities at the Australia Asia Smart City Forum 2018 parallel event. Australia appear to be paving the way in smart city initiatives, and the panel of six were in overriding agreement that smart cities are inevitable. One of the speakers stated that the movement is “coming whether you like it or not” and those that are not embracing it are going to struggle. This may be the case but I would argue that Australia is perhaps in a more fortunate position to implement it than many other cities across the world in terms of governance and infrastructure. This was acknowledged by one of the speakers who stated that Adelaide was more able to implement smart city initiatives due to the fact that it was a well-planned city back in the 1830s.

An interesting parallel was made to the green building movement. Steve Harrison (Chief Advisor to the CEO of Adelaide) stated that it took 10-15 years to make sense of the idea of green buildings, but once people realised that it was an initiative that paid back, the community and institutional investors started valuing and demanding it. He believes that the smart cities agenda is no different. However, Harrison states that unlike the green building movement, smart cities don’t have 15 years to be accepted by policy and society in regard to what they can do to address energy issues and the climate crisis to name a few. There is more urgency required for smart cities.

To conclude there seems to be mixed approaches and views to the smart city paradigm. However, as indicated above, this is probably due to the fact that the concept is so broad and covers a multitude of initiatives. I’m sure most people would agree that they are an important and necessary idea in regard to reducing environmental degradation and tackling issues of climate change. However, there is still a gaping hole in the question of what the data is measuring, how it is being measured and who is being left out of the measurements. This clearly needs to be addressed right now if the NUA is to be fulfilled by 2030.

Alice Preston-Jones @Alice_PJ_  is studying a MA in Cities and Global Development. Her focus at the World Urban Forum 9 is on the role of architects and planners in regard to the implementation of the New Urban Agenda, specifically concerning environmental challenges. In addition to this she will be exploring the role that urban citizens will play within the smart city paradigm.

Let’s Go back to Mercantilism and Trade Blocs!