Book Review – Rules for Rebels: The Science of Victory in Militant History 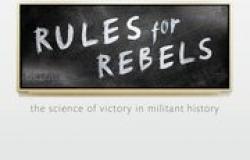 With the death of Islamic State of Iraq and Syria (ISIS) leader Abu Bakr al-Baghdadi in October 2019, the world and particularly Western governments celebrated their victory over one of the most notorious militant groups in modern times. The president of the United States announced “He died like a dog. He died like a coward. The world is now a much safer place.” While it is debatable whether the world is now a much safer place or not, an obvious and common question that arises is whether this marks an end of ISIS and its terrorist activities. To answer this, it would be useful to ask how we can position ISIS as a rebel group: success or failure. This book by Max Abrahms is an important contribution towards addressing this question. Setting the context of the book’s inquiry, which originated during the author’s field visit to the West Bank, the book opens up with the puzzle: despite the common view among scholars that terrorism can be a successful tool to achieve political ends, why is Palestinian terrorism not seen as successful by both Israelis and Palestinians? Limiting strictly the definition of terrorism to attacks only against civilians, the author argues against what he calls the ‘strategic model of terrorism’. According to this model, terrorist acts are viewed as a strategic tool to achieve the political goals of a rebel group. On the contrary, Abrahms argues that terrorism cannot be a successful tool for rebel groups. Instead, he outlines three rules for rebels to be successful (without using terrorism): ‘learning to win’, ‘restraining to win’, and ‘branding to win’.

The first rule, as outlined in the first part of the book, is about the choice of target of a rebel group. As per this rule, the rebel group must learn that real political success is achieved only when the target of the attack is limited to military or state representatives rather than civilians. By studying rebel groups which used both civilian and military targets, the author argues that there is nothing strategic about terrorism, as it always fails to achieve its political objective. Hezbollah, Irgun and the African National Congress are cited as militant groups who succeeded in achieving their political goals by strictly restraining civilian causalities. The second rule is about ensuring that the followers of the group restrain from attacking civilians. Citing the principal-agent problem, the author contends that the more centralised the structure of the group is, the easier it is for the leader to discipline followers to restrain them from attacking civilians and thus enabling the group to achieve its political goals. Lastly, the third rule is branding the rebel group as a legitimate and responsible organisation by means of ‘Denial of Organisational Involvement’ (DOI) and ‘Denial of Principal Intent’ (DPI). The author observes how, by denying the group’s role, a successful militant leader covers up civilian attacks carried out by the lower ranking members. Furthermore, Abrahms mentions that although DOI is preferred over DPI, if the group’s members are caught red-handed then the leader must resort to DPI. Here the author observes that propaganda videos are used as an image restoration tool. For instance, even ISIS used moderate videos which contain images of its hospitals, schools, and hotels.

What makes the book outstanding is its multidisciplinary approach, the appropriate use of mixed methods research and, most importantly, a highly pragmatic set of three rules to understand rebel groups. The book is multidisciplinary in the sense that it relies on cognitive psychology, communication theory, and organisational theory in understanding terrorism. For instance, whereas the second part of the book relies mostly on organisational theory, the third part of the book uses communication, marketing and psychological theories. Throughout the book, the author uses both quantitative and qualitative methods in order to support his arguments. Statistical analysis, personal interviews and observations are used extensively to arrive at the results. Hence, it is safe to contend that these three rules are appropriate to calibrate whether a rebel group will be a success or a failure.

Coming back to the question on the implication of the death Abu Bakr al-Baghdadi on ISIS and its terrorist activities, the book leads us to conclude that it will not make much difference to ISIS members and its terror activities, as the group violates all of these three rules. (Indeed this is Abrahms’ more recent view on the matter.) That is, first ISIS did not learn to avoid attacking civilians; thousands of people from Syria and Iraq were targeted mercilessly. Second, ISIS did not restrain its fellow members from the brutal killing of civilians. Not only its leader Baghdadi, but also the decentralised structure of the group contributed to the uncontrolled massacre of civilians and glorification of their killings by the group’s lower ranking members.  Lastly, the group normalised terrorist acts by openly promoting them on social media. Therefore, the author argues that rebel groups like ISIS are nothing but a failure and that terrorist activities will continue to be ultimately unsuccessful, unless the leaders of rebel groups follow the three ‘rules for rebels’.

Furthermore, the book concludes that indiscriminate violence, whether it is by state or non-state actors, is always counterproductive. Hence, as a part of counterterrorism measures, the author stresses the need for a more well researched and mindful counterterrorism policy. Finally, the author cautions against the dramatic characterisation of terrorists and their activities by policy makers and media. This is a developing discourse in the study of terrorism, especially in the field of international relations and security.

In a nutshell, Rules for Rebels is not something that terrorism scholars and policy makers can ignore. More so, as the author rightly concludes, this book is equally relevant to rebel groups. The book seems to have become more significant now than it was when published in 2018. The insights from these three rules will equip policy makers with an in-depth understanding on internal and external factors that have implications for the success of rebel groups. This will enable policy makers to draw up appropriate policies to address these issues. And, for rebel groups, these rules can be guiding principles to be effective in achieving their political goals without resorting to terrorist activities.