The Elephant in the Room: The International Arms Trade and the G7 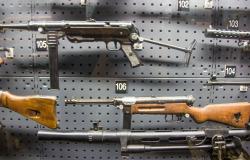 International Media Centre – G7 Charlevoix Summit. This year’s G7 Summit in Charlevoix had promised to be a thoroughly feminist affair, with gender equality, development and security all central to the Canadian presidency. In an attempt to mirror his own feminist foreign policy, Justin Trudeau has created an agenda that aims to promote women’s empowerment globally, proclaiming gender equality central to economic advancement and extreme poverty reduction. Despite one of the most ambitious G7 agendas we have seen for some time, the impact of international arms sales on the developing world is not up for discussion at all.

The adoption of the Sustainable Development Goals (SDGs) in 2015 marked a universal call to action to end poverty, protect the planet and ensure all people enjoy peace and prosperity, and has been reflected in subsequent G7 agendas. Conflict and violence often contribute to, and intensify poverty in developing countries, with women and children suffering disproportionately during and after war. More people than ever are thrown into poverty by war, conflict and persecution, with 65 million people displaced worldwide in 2016.  Meanwhile global military spending is currently booming, exceeding $1.7 trillion in 2017.

However, many of the G7 leaders continue to ignore the connection between the arms trade and the development failures that it can provoke and which they claim to want to overcome.

Even though the Arms Trade Treaty (AAT) was adopted by the UN General Assembly in 2014, several of the G7 leaders supply arms to Saudi Arabia, the second biggest importer of major arms worldwide. The AAT prohibits the transfer of arms that could be used to commit or facilitate genocide, crimes against humanity, or war crimes. However, Canada, the US, the UK and France all have billion-dollar deals with the Kingdom.

All four countries have furiously defended these deals, even though the Saudi regime has faced intense international criticism surrounding the war in Yemen, and is considered to be one of the most repressive regimes towards women worldwide. Trudeau in particular has struggled to obtain support for his deal. However, if he wants Canada’s G7 presidency to be defined by a commitment to gender equality, development and global security, surely he should be looking to follow Germany's example, and halt arms sales to Saudi Arabia.

India is currently the largest importer of weapons, having spent more than $100 billion in the last 10 years. It also has more of the world’s abject poor (280 million) than any other country.  Spending a huge amount on expensive arms imports automatically means that there is less to invest in human development.

In short, the world’s leading economies are profiting from arming poor countries and in the process are reducing spending that would, otherwise, be directed towards poverty alleviation and meaningful development.

The US, Germany, France, the UK and Italy are all in the top ten countries for global arms exports in the world. It is therefore not surprising that arms trade regulation has not made it onto previous agendas.

However, with the SDGs 2030 deadline looming ever nearer, it is time for the G7 to take charge and start a serious conversation about arms trade transparency and regulation.  Indeed, in order to take steps towards a more peaceful and secure world, it is time they prioritised morality over money.

Book Review - From the Ashes of History: Collective Trauma and the Making of International Politics