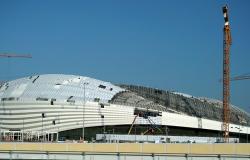 Sarath Ganji corrects the record on “sportswashing” by detailing the ways that regimes—including Qatar, host of this November’s World Cup—use sports as a tool of information manipulation.

Come November, billions of people will be tuning into the FIFA World Cup—and not just for the football. This year’s edition is being hosted by the nation of Qatar, the first time the sport’s most celebrated competition will take place in the Middle East. By some accounts, it is a triumph that this small Gulf peninsula—with a population of 2.9 million and a land mass the size of Jamaica—could mobilize the labor and technology needed to put on one of the world’s most watched and attended events. By other accounts, it is a tragedy, based on a decade’s worth of reports that Qatar’s leaders bribed FIFA officials to secure hosting rights, that Qatar’s implementing partners deprived migrant workers of their human rights, and that Qatar’s conditions may jeopardize the health and safety of players and spectators. Political analysts and advocates, alongside sports fans and betters, will all be watching.

Meanwhile, Qatar is making a bet of its own: that its breaches will be forgotten once observers turn their attention to the names and faces, the drama and the energy, of the World Cup’s matches. It is making a bet, in other words, on the power of sportswashing.

Sportswashing refers to a state’s use of international sports to clean its public image. “Cleaning” implies the laundering state has a blemished record that is impeding its interests, so it invests in sports to distract target audiences from its faults. Qatar’s list of blemishes is long, from its domestic limitations on political rights and civil liberties to its international links to extremist groups. By hitching its brand to sports, Qatar hopes to influence the infospheres of its audiences, tilting the balance of coverage about it from negative to positive. Playing host to the World Cup, then, is a demonstration of Qatari sharp power—of the authoritarian toolkit applied to the beautiful game.

The Character of Launderers

That Qatar’s sporting intentions could be characterized as a form of reputation-laundering is a bit surprising. After all, not until a few years ago did commentators begin tagging Qatar’s sports investments with malevolent designs. Before that—and even since—Qatar’s foreign policy was held up as a paragon of soft power: the moves a state makes to persuade and attract others to its cause. Scholarly articles on Qatari actions are among the most cited in the soft power literature, while media reports on Qatari feats frequently mention its soft power aims. Accordingly, commentators have long treated Qatar’s sports investments as a form of public diplomacy.

Why then is Qatar—together with China, host of February’s Winter Olympics—said to be bookending “sportswashing’s biggest year?”

One answer has to do with the character of laundering regimes. Sportswashing is not simply a tool of autocrats; democrats seeking to sponge their own stains can use sports, too. But unlike democrats, autocrats are generally free of the accountability and course corrections that come with competitive elections and associational politics. As a result, it is difficult for those in open societies to accept autocrats’ diplomatic overtures through sports—to trust what they say, given what they might otherwise do.

And Qatar has done plenty. An absolute monarchy, the state is ruled by a single family whose autocratic practices have shaped all walks of Qatari life, including its World Cup preparations. Migrant rights have become the biggest blemish on Qatar’s record. Since 2011, over 6,500 migrant workers have reportedly died—a significant portion of them likely while supporting World Cup projects. For years, Amnesty International and Human Rights Watch have documented the patterns of abuse and exploitation resulting from Qatar’s guest worker program, and have called into question recent government reforms that they say are not being rigorously implemented and enforced. The Qatari government has responded by emphasizing the breadth of its reforms, wherein progress is incremental and casualty figures much lower. But trusting autocrats, as noted, is a tough ask—especially when the state then arrests foreign journalists and jails a former official attempting to address migrant concerns.

The Logic of Laundering

A second answer has to do with the logic of laundering itself. The power of sportswashing lies in information manipulation—in the bankability of sports content to discredit, displace, and debase other kinds of content reaching audiences. That content can come from any part of an audience’s infosphere, be it broadsheets, broadcasts, or Internet boards. But when that content runs counter to the desired images of autocrats, sports offer a way out.

In Qatar’s case, that way out can take one of three forms.

First, sports can discredit negative content by positioning trusted intermediaries to propagate alternate perspectives. These intermediaries are usually athletes and officials drawn from beyond the launderer’s borders—ones who can leverage their celebrity to spin negative coverage. Over the years, Qatar has built an impressive roster of intermediaries. English footballer David Beckham is one of them. The former star first came into the Qatari orbit in 2013, when he signed a short-term deal to play for Qatar-owned Paris Saint-Germain. In the years since, he has made multiple trips to Qatar and has used these visits to reframe coverage of the country’s World Cup. In 2019, for example, the footballer went on record praising Qatar’s stadiums and hotels and celebrating its World Cup for giving audiences “an opportunity to experience football in places you wouldn’t expect to visit.” This, despite widespread criticism of the country’s exploitative construction and hospitality sectors. In October, Beckham reportedly signed a multi-million-dollar deal to serve as an ambassador for Qatar’s World Cup, inviting additional chances for spin.

Second, sports can displace negative content by shaping the media’s news agenda. Major sporting events benefit from selection bias in the media. Researchers from Uruguay discovered that when the country’s national football team advanced to the knock-out stages of the 2018 World Cup, local media temporarily shifted their reporting agenda away from content having to do with public accountability. Having hosted nearly 150 major sporting events since the 1970s, Qatar has had that many opportunities to alter media outlets’ reporting agendas. That appears to be happening even now, as reporters begin writing more World Cup stories not having to do with migrant rights.

Finally, sports can debase negative content by generating positive associations for beat-up brands. An important part of sports is the atmospheres—the experiences of shared emotion—that they elicit for audiences. A group of international researchers found that the atmospheres created during English Premier League matches could cultivate fan loyalties by transferring the emotions of these events to the logos and names of their sponsors. To that end, Qatari companies are well-positioned, having sponsored clubs and competitions on six continents. “Qatar Airways,” for example, is printed on the kits of top teams in Argentina, Tunisia, and Germany and is plastered on the signage of major FIFA and UEFA matches. The World Cup presents an extraordinary opportunity for Qatar to use gameday emotions to rehab the country’s image.

The Outcomes of Laundering

Qatar’s sports portfolio affords it many opportunities to launder its reputation—and just as many to disrupt actors in open societies. Investigations by governing bodies and national authorities, as well as news reports by media collaboratives, reveal the extent to which Qatar’s wealth has bought it a seat at some of sports’ most consequential tables. It is here that the outcomes of Qatar’s sharp power are being felt.

In Europe, Qatar’s financing of Paris Saint-Germain was the subject of a 2017 UEFA investigation. After a year-long review, officials concluded that the club had overvalued its sponsorship agreements—a tactic meant to raise enough revenue, without violating UEFA’s financial fair play rules, to sign two of the sport’s biggest stars in the same year. The body ultimately cleared the club, but not before sowing division within its own ranks and compromising its commitment to a level playing field.

Further afield, Qatar’s investments in football’s supporting infrastructure have prompted concerns. The Aspire Academy, a government-owned training institute, has spent years scouting and recruiting amateur athletes across Asia, Africa, and Latin America. Those efforts have come under scrutiny for reportedly trafficking children between their home countries, Qatar, and Europe. Meanwhile, the International Centre for Sport Security, a think-and-do tank with ties to the Qatari government, has partnered with intergovernmental organizations to advance anti-corruption causes. The Centre was found to have used law enforcement resources to spy on sporting officials from rival nations.

These actions and outcomes are hardly unique to Qatar. The United Arab Emirates commands a sports portfolio that includes hosting events, sponsoring properties, and acquiring teams, and it, too, has generated controversy. What is unique, though, is the model that these states have brought to the fore. Last fall, Saudi Arabia purchased an English football team of its own, while Rwanda, run by strongman Paul Kagame, renewed its sleeve sponsorship of Arsenal. Unless democratic actors take concerted action to hinder these moves, sportswashing may well prove a winning bet.

Sarath K. Ganji is a Penn Kemble Fellow at the National Endowment for Democracy. He previously served as a strategy and transformation consultant with the U.S. Department of State and as a U.S. Fulbright Scholar based in the Arabian Gulf. Follow him on Twitter @Sarath_Ganji.

From Dissatisfaction to Mobilisation: The Islamic Republic’s Perfect Storm