Why do Earthquakes continue to Kill More in the Developing World? 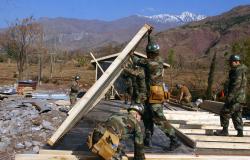 Earthquakes continue to be the deadliest type of disasters in developing countries. In particular, more than two-third (67.60%) of the earthquake deaths, since the new millennium (2000-2018), occurred in Asia.

A recent study highlights the barriers, their modifiers, and resulting in malpractices and missed good practices that hinder our efforts to Build Back Better (BBB) after earthquakes. BBB calls for strengthening institutions, building capacity and improving coordination among different stakeholders. Implicitly, BBB emphasises removing barriers to disaster risk reduction, resilience and adaptation.

The study provides insights to the often asked question: why are the lessons learnt from one earthquake event are not actually learnt and many of the mistakes around housing

reconstruction repeated? To answer it, the study analysed the 2005 Kashmir earthquake and the 2015 Hindukush earthquake in Pakistan, the fifth most populous country in the world. Here, we draw on some of the key challenges to BBB from Pakistan’s experience and the applicability of these lessons in other developing countries.

In the last 18 years, Pakistan was the 4th top country in the world after Haiti, Indonesia and China with a total loss of 74,372 lives as a result of 9 earthquake events. Hard-pressed to provide basic facilities to its citizens, disaster management falls low on the state’s development agenda.  Excessive damage in terms of infrastructure and casualties from the 2005 Kashmir earthquake and then again the 2015 Hindukush earthquake in the underdeveloped Khyber Pakhtunkhwa (KPK) province raised questions about barriers that lent to the repetition of past malpractices. Barriers are understood as conditions or factors that render adaptation difficult in response to the challenges posed by climate change. However, barriers alone are not at play during recovery since barriers are magnified by their modifiers. Modifiers are other factors such as governance structure and culture that often influence how barriers would be dealt with.

In the Kashmir and Hindukush earthquakes, what were some of the root causes of widespread destruction? These were non-BBB compliant reconstruction, flaws in designs and inappropriate site selections and an overall lack of due appreciation of the seismic risk and planning at national and sub-national levels. The barrier of the weak financial standing of rural communities made people choose cheaper materials and vulnerable locations. This decision, in turn, was modified by a lack of access to aid, labour and other supplies. Geographically, the mountainous locations offered few construction options and also increased the transportation costs of materials.

Yet another complexity to BBB responses stems from the low institutional capacity of the state of Pakistan. Though its policies improved after the 2005 earthquake, it was still too weak to effectively plan, coordinate and monitor their implementation, , leaving several loopholes. For example, the Building Codes of Pakistan were introduced in 2007, but the state institutions, in particular at the local (district) level, did not have the capacity and wherewithal to ensure compliance.

Inappropriate housing designs have resulted in missed opportunities for Build Back Better measures in the aftermath of the two earthquakes in Pakistan and elsewhere. As seen in Nepal after the 2015 Hindukush earthquake, historical traditions and a cultural preference for large rooms led to inappropriate modifications compromising the structural integrity of houses. Similar cultural preferences were reflected in the building of numerous unsafe spaces in the form of extensions, partitions and the addition of new components to houses during the reconstruction in the aftermath of the 2004 Tsunami in Thailand. In the case of reconstruction after the 2005 Kashmir earthquake, some of the malpractices seen included the usage of timber posts due to its low costs compared with concrete columns. This led to wider timber-stone construction, which is considered non-compliant with BBB guidelines. Another malpractice was timber frame construction mixed with concrete columns, also considered non-compliant.

The September 24th 2019 Kashmir earthquake in Pakistan was another grim reminder of where the country stands in terms of earthquake preparedness. More than 700 hundred people were injured and 38 lost their lives, mostly due to the fall of non-compliant buildings. This occurred at the time of the 14th anniversary of the worst earthquake of its history, the 2005 Kashmir earthquake.

The construction malpractices by communities are not simple ‘engineering mistakes’ but rather an expression of the barriers and their modifiers emanating the inability of an already impoverished community, the incapacity of construction stakeholders and lapses in BBB policies, and the poor practices governing the built environment. Pakistan being no exception, numerous political, economic, technical, informational and cultural factors hinder the realisation of better recovery and reconstruction practices across the developing world as seen in Haiti, Indonesia, China, Sri Lanka, Iran, India, Nepal and Thailand.

Though Pakistan and other similar countries in the region have seen severe earthquakes in a short span of time and many of the required legislative and institutional arrangements are in place, the enormity and complexity of barriers to BBB are likely to persist longer than expected. What can Pakistan and other countries can learn from past mistakes to do more to secure the lives and assets of their people?

To leverage recovery as an opportunity, barriers have to be looked at through a holistic approach that anticipates and acknowledges the overarching nature of endemic impediments to BBB. Malpractices can be avoided by being better prepared to address the apprehensions of the affected communities and underlying institutional gaps. The effect of barriers can be reduced by breaking free from their modifiers and viewing reconstruction as an opportunity to employ good practices.  The effects of barriers and modifiers can only be abated if institutions and communities collectively work in a systematic way to build back better.

An Ecosystems Approach to Understanding Identification Systems' Potential for Development